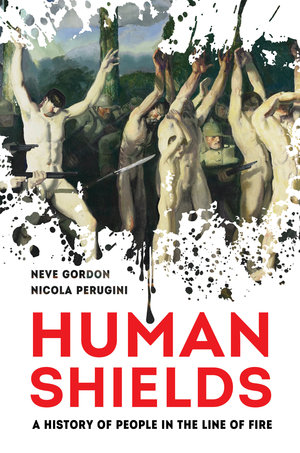 Human Shields A History of People in the Line of Fire

From Syrian civilians locked in iron cages to veterans joining peaceful indigenous water protectors at the Standing Rock Sioux Reservation, from Sri Lanka to Iraq and from Yemen to the United States, human beings have been used as shields for protection, coercion, or deterrence. Over the past decade, human shields have also appeared with increasing frequency in noncombat contexts such as antinuclear struggles, civil and environmental protests, and even computer games. The phenomenon, however, is by no means a new one.

In Human Shields, Neve Gordon and Nicola Perugini describe how human shields have been used in key historical and contemporary moments and across geographical sites. The practice of human shielding corresponds with the history of shifting understandings of what is valued as “human”: in the American Civil War and the Franco-German War, only the elite were used as shields, while in later conflicts, hundreds of thousands of women and children and people of color were placed in the crossfire as deterrents.

Human Shields demonstrates how this increasing weaponization of human beings has made the position of civilians trapped in theaters of violence more precarious and their lives more expendable.

Neve Gordon is Professor of Human Rights and International Law at Queen Mary University of London. He is the author of Israel’s Occupation and coauthor of The Human Right to Dominate.

Nicola Perugini is Senior Lecturer in International Relations at the University of Edinburgh. He is the coauthor of The Human Right to Dominate.

"In this amazing book, Neve Gordon and Nicola Perugini excavate the forms of human shielding, including as a pacifist tactic, in a diverse range of locales around the world and over a century and a half. With its insights into the politics of who counts as human, Human Shields is one of the most important interventions ever in the critical history of the laws of war."—Samuel Moyn, author of Not Enough: Human Rights in an Unequal World

"Compellingly important and thoroughly absorbing, this very readable book will fast become the standard reference in our understanding of human shields."—Laleh Khalili, author of Sinews of War and Trade: Shipping and Capitalism in the Arabian Peninsula