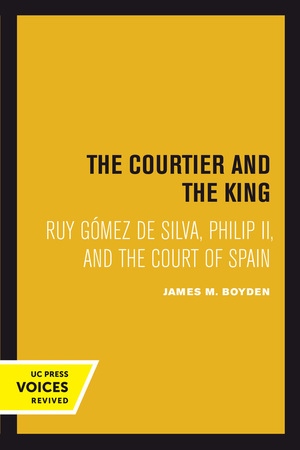 Courtier and the King Ruy Gómez de Silva, Philip II, and the Court of Spain

Ruy Gómez de Silva, or the prince of Eboli, was one of the central figures at the court of Spain in the sixteenth century. Thanks to his oily affability, social grace, and an uncanny knack for anticipating and catering to the desires of his prince, he rose from obscurity to become the favorite and chief minister of Philip II.

From the scattered surviving sources James Boyden weaves a vivid, compelling narrative: one that breathes life not only into Ruy Gómez, but into the court, the era, and the enigmatic character of Phillip II as well. Elegantly written and highly readable, this book discovers in the career of Gómez the techniques, aspirations, and mentality of an accomplished courtier in the age of Castiglione.

"This is a little jewel of a book. Beautifully and elegantly written, it examines the political career of an important figure at the court of Philip II of Spain. It is political biography in the best sense of the term."—Richard Kagan, author of Lucrecia's Dreams