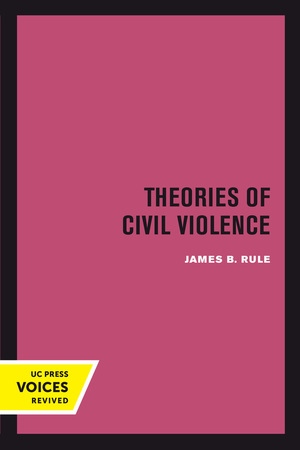 Theories of Civil Violence provides both a new look at the origins of civil upheaval and a critical examination of society theory itself. James B. Rule develops an incisive historical analysis of theories of civil violence, beginning with the classic views of Hobbes and Marx and continuing to those of Gurr, Tilly, and other present-day thinkers. He then exploits this overview to yield conclusions on the nature of and prospects for theoretical understanding of social and political life in general. This title is part of UC Press's Voices Revived program, which commemorates University of California Press’s mission to seek out and cultivate the brightest minds and give them voice, reach, and impact. Drawing on a backlist dating to 1893, Voices Revived makes high-quality, peer-reviewed scholarship accessible once again using print-on-demand technology. This title was originally published in 1988.

James B. Rule is a sociologist and writer based in Berkeley, California. He is Distinguished Affiliated Scholar at the Center for the Study of Law and Society, part of the UC Berkeley School of Law.

"Theories of Civil Violence is much more than the overview of current theories of political contention that it appears initially to be. It is, rather, a case study in which the history of multiple, but selected, streams of conflict theory is used in order to study progress in social science theory generally. . . . There are adept summarizations and shrewd insights aplenty. . . . Anyone interested in metatheory, in the sociology of knowledge, in theoretical change in the social sciences, and especially in popular contention would be well advised to read it."—James W. White, American Journal of Sociology "Theories of Civil Violence is one of the two or three most important books in conflict theory of the decade."—Ted Robert Gurr, University of Colorado, Boulder "This is a rich and imaginative work steeped in common sense and directive for improving our understanding. Rule is a master at reflexive discourse. Theories of Civil Violence will surely endure as a chronicle and commentary."—Gary T. Marx, Massachusetts Institute of Technology