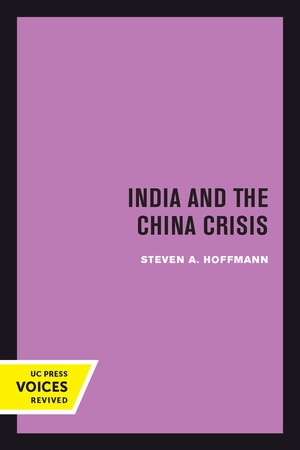 India and the China Crisis

The earliest accounts of the Sino-Indian boundary dispute cast India as the victim of Chinese betrayal and expansionism, but a more favorable image of China vis-a-vis India has appeared since the 1970s. Since then, China has been portrayed as the victim of India's self-righteous intransigence, with the 1962 India-China war occurring because China was provoked into practicing a justifiable form of realpolitik. These two seemingly irreconcilable academic schools of thought still exist. In this case study of India's decision-making between the years of 1959 and 1963, the critical first years of its border conflict with China, Steven A. Hoffmann takes an important step in reconciling the conflicting views of the crisis and of the ascribed reasons for the war that ensued in 1962. Drawing on interviews with Indian officials, military officers, and political leaders and on memoirs and other sources gathered during concentrated research in India, England, and North America between 1983 and 1986, the author provides previously unknown material on the perceptions and realities of Indian decision making. A model for international crisis behavior, as proposed by Michael Brecher, is used to help establish a balanced treatment of information and offer insights into such questions as why India and China both failed to understand one another's frontier psychologies and strategies, and why the Nehru government did not succeed in managing the conflict. This richly detailed and carefully researched approach is invaluable in this time when India and China are once again exploring ways to establish a solid relationship.

Steven A. Hoffmann teaches in the Department of Government at Skidmore College.