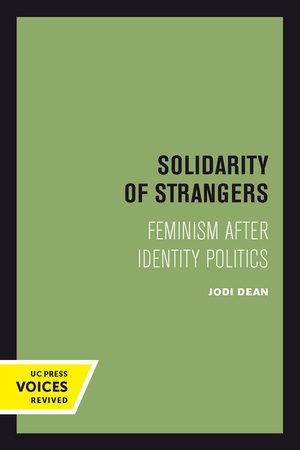 Solidarity of Strangers is a crucial intervention in feminist, multicultural, and legal debates that will ignite a rethinking of the meaning of difference, community, and participatory democracy. Arguing for a solidarity rooted in a respect for difference, Dean offers a broad vision of the shape of postmodern democracies that moves beyond the limitations and dangers of identity politics.

Jodi Dean is Professor of Political Science at Hobart-William Smith Colleges. She is on the editorial boards of Constellations and Philosophy and Social Criticism, and is the editor of Resisting the Political: Feminism and the New Democracy.

"Anyone concerned by the swirling academic and political debates over identity politics, multiculturalism, and what could bring us together in divisive times should read Jodi Dean's welcome argument for reconstructing a conscious, deliberative solidarity. With insightful engagement with scholars as diverse as Judith Butler, Cornel West, Jürgen Habermas, and Lynet Uttal, Dean models the kind of dialogue she advocates."—Martha Minow, author of Making All the Difference: Inclusion, Exclusion, and American Law "Solidarity of Strangers is an impressive achievement. Dean works to move political theory beyond the poststructuralist/Habermasian divide as she offers a discourse ethics that accounts for difference and a universalism that does not abandon specificities."—Shane Phelan, author of Getting Specific: Postmodern Lesbian Politics "Dean offers a strong, original, and humane defense of universalist ideals against doubts—which she deeply grasps and sympathetically arrays—of the compatibility of such ideals with a respect for difference."—Frank Michelman, Harvard Law School "Dean has a real gift for weaving personal narrative, current events, law, and high theory. Her complicated and important argument attempts to move behond the either/or of identity politics and its critics via a creative reevaluation of universalism premised on difference and plurality. A very important book."—Judith Grant, University of Southern California, author of Fundamental Feminism: Contesting the Core Concepts of Feminist Theory "Calling for inspiration on Habermas, George Herbert Mead, and their critics, Dean challenges conventional interpretive constraints on law and theory, aiming to open up contestable spaces to democratic practices. She offers the ideal of reflective solidarity as a vehicle for reclaiming a qualified notion of universality for feminism. This controversial move will no doubt provoke debate, requiring readers to think through the link between our epistemological convictions and our political commitments."—Kathy Ferguson, author of The Man Question: Visions of Subjectivity in Feminist Theory