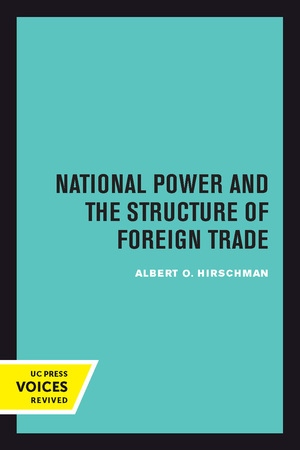 This study begins with a brief survey of economic thought on the relationship between foreign trade and national power, from the Mercantilists on. Chapter II attempts a systematic theoretical approach to the subject. It first makes clear the fundamental basis of the possible use of foreign trade as an instrument of national power policy. Using well-known concepts of economic analysis, it proceeds to show under what conditions and by means of what policies this instrument is likely to attain its highest efficiency. The principles of power policy thus deduced theoretically are then compared with the actual practices followed by German trading methods in recent years. Toward the end of this chapter the reader will be carried into a detailed discussion of certain problems of the theory of international trade, which are touched upon earlier in the chapter.

Chapter III is applied to the historical background of our problem. It gives a survey of the literature on "economic aggression" before and during World War I and brings out the importance of the Paris Economic Conference of the Allies in 1916 for the Versailles Treaty and postwar economic policies.

In Chapter IV we review in the light of our theoretical and historical analyses certain safeguards or remedies which could be or have been proposed to prevent the use of foreign trade as an instrument of national power policies.

Certain questions raised in Part 1 can be answered in quantitative terms. Part 2 consists, therefore, of an exposition of various trends of international trade in recent years disclosed by statistical analysis.

In Chapter V we calculate an index number expressing the extent to which the trade of the large trading nations is or has been directed by preference toward the smaller trading countries. Chapter VI gives index numbers for the degree of concentration of their foreign trade on one or a few big markets or sources of supply. Finally, in Chapter VII we measure the extent to which world trade has been based primarily on an exchange of manufactures against raw materials and foodstuffs.

This title is part of UC Press's Voices Revived program, which commemorates University of California Press’s mission to seek out and cultivate the brightest minds and give them voice, reach, and impact. Drawing on a backlist dating to 1893, Voices Revived makes high-quality, peer-reviewed scholarship accessible once again using print-on-demand technology. This title was originally published in 1945, with an expanded edition published in 1980.

Albert O. Hirschman rescued thousands of artists and intellectuals from Nazi-occupied France. He went on to become an influential economist and the author of several books on political economy and political ideology.