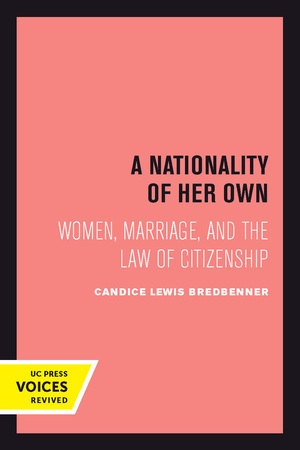 A Nationality of Her Own Women, Marriage, and the Law of Citizenship

In 1907, the federal government declared that any American woman marrying a foreigner had to assume the nationality of her husband, and thereby denationalized thousands of American women. This highly original study follows the dramatic variations in women's nationality rights, citizenship law, and immigration policy in the United States during the late Progressive and interwar years, placing the history and impact of "derivative citizenship" within the broad context of the women's suffrage movement. Making impressive use of primary sources, and utilizing original documents from many leading women's reform organizations, government agencies, Congressional hearings, and federal litigation involving women's naturalization and expatriation, Candice Bredbenner provides a refreshing contemporary feminist perspective on key historical, political, and legal debates relating to citizenship, nationality, political empowerment, and their implications for women's legal status in the United States. This fascinating and well-constructed account contributes profoundly to an important but little-understood aspect of the women's rights movement in twentieth-century America.

This title is part of UC Press's Voices Revived program, which commemorates University of California Press’s mission to seek out and cultivate the brightest minds and give them voice, reach, and impact. Drawing on a backlist dating to 1893, Voices Revived makes high-quality, peer-reviewed scholarship accessible once again using print-on-demand technology. This title was originally published in 1999.

Candice Lewis Bredbenner is Associate Professor and Undergraduate Coordinator in the Department of History at University of North Carolina Wilmington.

"A very thorough and extremely well-researched study of the making of U.S. policy on married women's citizenship between 1855 and 1934, including a focus on the women's groups that campaigned to move the policy from dependency for the wife to independent citizenship. . . . This is a more detailed history of policy-making in this area than has been done for decades."—Nancy F. Cott, Yale University

"This is a growing and important aspect of the history of feminism; the differences of opinion and strategy over these policies serve as an excellent case study of the politics of the women's movement of the early part of this century."—Virginia Sapiro, University of Wisconsin, Madison