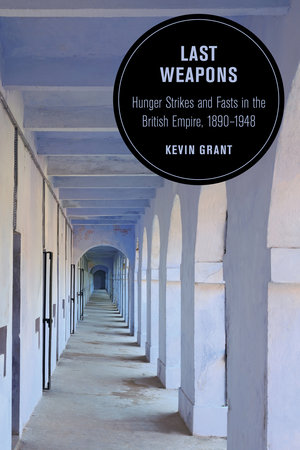 Last Weapons Hunger Strikes and Fasts in the British Empire, 1890–1948

Last Weapons explains how the use of hunger strikes and fasts in political protest became a global phenomenon. Exploring the proliferation of hunger as a form of protest between the late-nineteenth and mid-twentieth centuries, Kevin Grant traces this radical tactic as it spread through trans-imperial networks among revolutionaries and civil-rights activists from Russia to Britain to Ireland to India and beyond. He shows how the significance of hunger strikes and fasts refracted across political and cultural boundaries, and how prisoners experienced and understood their own starvation, which was then poorly explained by medical research. Prison staff and political officials struggled to manage this challenge not only to their authority, but to society’s faith in the justice of liberal governance. Whether starving for the vote or national liberation, prisoners embodied proof of their own assertions that the rule of law enforced injustices that required redress and reform. Drawing upon deep archival research, the author offers a highly original examination of the role of hunger in contesting an imperial world, a tactic that still resonates today.

Kevin Grant is the Edgar B. Graves Professor of History at Hamilton College.

“In a brilliant mobilization of small details, forgotten actors, and myriad stories, Kevin Grant masterfully reconstructs scenes of politico-ethical combat otherwise hidden behind prison walls. It is a beautiful book, demonstrating a rich command of theoretical and historical scholarship.”—Seth Koven, author of The Match Girl and the Heiress

“A valuable, historically minded, and comparative exploration of a complex and painful subject.”—Richard English, author of Armed Struggle: The History of the IRA

“A remarkable study of sacrifice in modern politics, Kevin Grant’s book tells us how the hunger strike took on its contemporary form in the British Empire, contesting the empire's liberal justification in humanitarianism and the absolute value placed on life. By voluntarily disdaining it in slow motion, the hunger striker repudiated both life's foundational value for politics, and the spectacularly immediate form that other practices of sacrifice took in assassination or suicidal violence. A deeply humane meditation on the meaning of life in politics.”—Faisal Devji, author of The Impossible Indian: Gandhi and the Temptation of Violence