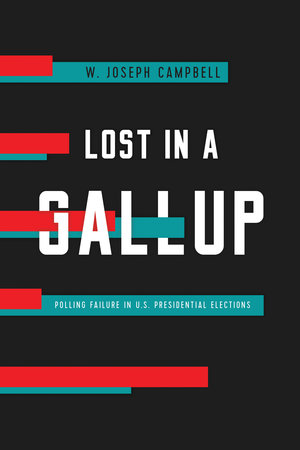 Lost in a Gallup Polling Failure in U.S. Presidential Elections

A sweeping look at the messy and contentious past of US presidential pre-election polls and why they aren’t as reliable as we think.

Polls in U.S. presidential elections can and do get it wrong—as surprising outcomes in 2020, in 2016, in 2012, in 2004, in 2000 all remind us. Lost in a Gallup captures in lively and unprecedented fashion the stories of polling flops, epic upsets, unforeseen landslides, and exit poll fiascoes in presidential elections since 1936. Polling’s checkered record in elections has rarely been considered in detail and, until now, has never been addressed collectively.

Polling embarrassments are not all alike. Pollsters have anticipated tight elections when landslides occurred; they have indicated the wrong winner in closer elections; state polls have confounded expected national outcomes. Exit polling has thrown Election Day into confusion. The work of venerable pollsters has been singularly and memorably in error. It is a rare presidential election not to be marred by polling controversies. Lost in a Gallup casts a critical eye on major figures in election polling such as George Gallup, a prickly founding father of public opinion research. The book also considers the polling innovations of Warren Mitofsky, whose admonition rings true across generations: “There’s a lot of room for humility in polling. Every time you get cocky, you lose.”

Lost in a Gallup examines how polling failure often equates to journalistic failure. Historically, poll-bashing was quite pronounced among prominent journalists, including well-known newspaper columnists such as Mike Royko in Chicago and Jimmy Breslin in New York. They and other journalists challenged the presumption that polls could accurately measure or interpret what the public was thinking. Even so, polls drive news media narratives about presidential elections, shaping conventional wisdom about how competitive those races are. As Lost in a Gallup makes clear, polls are not always in error. But when they fail, they can fail in surprising ways.

By W. Joseph Campbell, author of Lost in a Gallup: Polling Failure in U.S. Presidential Elections This post was originally published on The Conversation on July 20, 2021 More than eight months …

By W. Joseph Campbell, author of Lost in a Gallup: Polling Failure in U.S. Presidential Elections This post was originally published on The Conversation, and is reposted here with permission. Election polling …

This excerpt from Lost in Gallup: Polling Failure in U.S. Presidential Elections revisits the many confident expressions about Hillary Rodham Clinton’s candidacy in the final days and hours before the 2016 general …

W. Joseph Campbell is an American writer, historian, media critic, and blogger who is the author of six other books, including the award-winning Getting It Wrong: Debunking the Greatest Myths in American Journalism.

"Campbell puts the glaring mistakes of the 2016 presidential polls in historical perspective in this accessible and well-informed survey of polling errors. . . . Newshounds closely following the latest 2020 predictions would be well-advised to read this bracing reality check."—Publishers Weekly

"A fast-moving narrative history of some attempts to gauge public opinion amid electoral politics. . . . Campbell’s gaze goes far beyond the Beltway and back further in history than the astonishing election night four years ago."—Wall Street Journal

"Campbell’s book is a tour de force on the history of presidential polling.”—Civitas Institute

"Campbell shows how other errors have bedeviled the polling industry since 1936 despite decades of advances in computer power and statistical sophistication. It is difficult to read Campbell’s book without empathizing with the pollsters and (crucially, as Campbell observes) the journalists and pundits interpreting and amplifying their conclusions."—Milken Institute Review

"A lively account of the personalities and squabbles, the greatest hits and equally great misses, that marked polling’s U.S. ascent. . . . Campbell provides a brisk historical tour of technical breakthroughs like probability sampling and new instruments such as the exit poll. It is not exactly a tale of progress."—Reviews in American History

"Campbell’s book is well-written, impressively researched, and detailed. . . . Lost in a Gallup comes alive as Campbell relays the internal critiques, jealousies, evaluations, and self-assessments of the pollsters."—Journalism History

"Campbell’s journalistic style is engaging, and he covers a tremendous amount of ground. . . . [he] raises important and timely questions about both polling and journalism performance."—Public Opinion Quarterly

"Campbell's work always opens my eyes, challenging assumptions the world has turned into facts. . . . Whenever I get a chance to read Campbell's work, I seize it."—Jake Tapper, CNN anchor, chief Washington correspondent, and author of The Outpost and The Hellfire Club

“Pioneering pollster George Gallup once noted wryly that the only 'crime' in his business was to get an election wrong. If so, it’s a profession full of recidivists, as W. Joseph Campbell details in his sweeping account of polling failures in U.S. presidential elections. Campbell, who was a historical fact-checker before fact-checking was cool, has written the definitive account of this topic in a well-written narrative that is riveting even though the reader knows how the stories end. Now they will know why, as Campbell reveals the deleterious effects that polling debacles have on our already stressed politics. In the midst of another presidential election, this book is a must-read for every pollster, polling analyst, political writer, candidate, or campaign adviser in America, many of whom appear as characters—and not always admirable ones—in this superb book.”—Carl M. Cannon, Washington Bureau Chief, RealClearPolitics

“This book should be on every pollster’s desk to remind us of one stubborn fact—if we get too cocky with our polls, the actual voters will make us humble.”—Spencer Kimball, Polling Director, Emerson College

“Campbell reminds us that in the weakened state of U.S. politics, we may not survive another public opinion polling blunder such as the one we experienced in 2016. His book clearly and patiently explains the long and troubling history of polling failures in presidential politics, dating back to the New Deal. Today’s shaky, click-baited news industry is locked in a mutually dependent relationship with polling and may be more vulnerable to polling manipulation or misfeasance than journalists were in 1948. The book could not be more timely and should be a primer for every informed political observer and journalist.”—William J. Drummond, Professor of Journalism, University of California, Berkeley

“Campbell takes a deep dive into the science of polling—when it works, when it doesn’t, and why we continue to be fascinated with these ‘snapshots in time’ of public opinion. Lost in a Gallup is a well-researched, scholarly, and relevant look at the complexity of this key arena as we head into one of the most consequential elections of our era.”—Carla Marinucci, Senior Writer, Politico

“This engaging history of presidential polling mishaps goes beyond the usual focus on methodological shortcomings. It explores how critics have depicted the codependent relationships between pollsters, politicians, and the press. The stage is set for the next polling problem to be revealed.”—Joel Best, author of Damned Lies and Statistics and Stat-Spotting

Introduction: Of Pollsters, Journalists, and Presidential Elections
1. Of Poll-Bashing Journalists and the "Babe Ruth" of Survey Research
2. "A Time of Polls Gone Mad": The Literary Digest Debacle of 1936
3. "The Defeat of the Pollsters": The Epic Fail of 1948
4. A Tie "Would Suit Them Fine": The 1952 Landslide Pollsters Did Not Foresee
5. The "Close Race That Never Happened": Miscalling the 1980 Election
6. "Television's Version of "Dewey Defeats Truman"": The Trifecta of 2000
7. "President Kerry": Exit Polls Misfire in 2004
8. "Gallup vs. the World": Pointing the Wrong Way in 2012
9. "The Night That Wasn't Supposed to Happen": The Shock Election of 2016
Conclusion: Will It Happen Again?