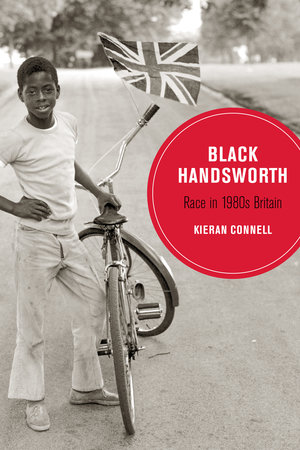 In 1980s Britain, while the country failed to reckon with the legacies of its empire, a black, transnational sensibility was emerging in its urban areas. In Handsworth, an inner-city neighborhood of Birmingham, black residents looked across the Atlantic toward African and Afro-Caribbean social and political cultures and drew upon them while navigating the inequalities of their locale. For those of the Windrush generation and their British-born children, this diasporic inheritance became a core influence on cultural and political life. Through rich case studies, including photographic representations of the neighborhood, Black Handsworth takes readers inside pubs, churches, political organizations, domestic spaces, and social clubs to shed light on the experiences and everyday lives of black residents during this time. The result is a compelling and sophisticated study of black globality in the making of post-colonial Britain.

"Connell has delivered an enriching history of everyday practices in Birmingham during the 1980s that established Handsworth firmly in the black Atlantic."—Journal of British Studies

"A fascinating and insightful read about the making of post-colonial Britain in the 1980s via its Black social actors in Handsworth."—Midland History

“Black Handsworth is a superbly executed explanation of the sociocultural and political dynamics of the coalescence of race in Thatcher’s Britain. Kieran Connell makes a highly original contribution to the fields of contemporary social and cultural history, offering a sustained exploration of the meaning of ‘race’and what it meant to be black in Britain during a period of extreme racial tensions and structural social change. In short, this is a really terrific book that succeeds better than any other work I can recall in relating an argument about diasporic culture and black consciousness to the locally textured patterns of organized sociability and everyday community life in Birmingham.”—Geoff Eley, author of Forging Democracy: The History of the Left in Europe, 1850–2000

“Black Handsworth is a major contribution to the history of modern Britain. Kieran Connell provides an exceptional reconstruction of black British life in late-twentieth-century Britain, an account that embraces, in a way rarely seen in modern British history, a wide variety of fields: visual culture, music, leisure, religion, everyday life, and politics. Grounded in rich archival and oral sources and theoretically acute, Black Handsworth traces the experiences of black British people and the contributions they made to reshaping modern Britain.”—Stephen Brooke, author of Sexual Politics: Sexuality, Family Planning, and the British Left from the 1880s to the Present Day


“I know nothing quite like Black Handsworth. It is profoundly local and ‘thick’ in its ethnographic focus. Connell possesses an impressive intimacy with the streets and locales that appear in his story. The study is wonderfully populated with folk whose histories are unexpected. And yet, in delineating the story of race in Britain, it serves as a testament to the intellectual virtues of the historical imagination. This is a magnificent book.”—Bill Schwarz, author of The White Man's World
Read More >