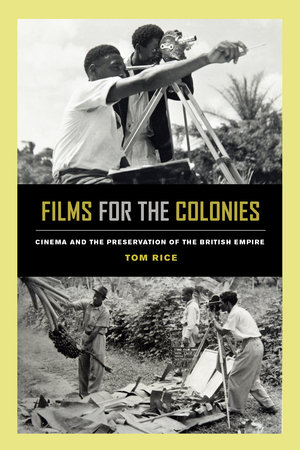 Films for the Colonies examines the British Government’s use of film across its vast Empire from the 1920s until widespread independence in the 1960s. Central to this work was the Colonial Film Unit, which produced, distributed, and, through its network of mobile cinemas, exhibited instructional and educational films throughout the British colonies. Using extensive archival research and rarely seen films, Films for the Colonies provides a new historical perspective on the last decades of the British Empire. It also offers a fresh exploration of British and global cinema, charting the emergence and endurance of new forms of cinema culture from Ghana to Jamaica, Malta to Malaysia. In highlighting the integral role of film in managing and maintaining a rapidly changing Empire, Tom Rice offers a compelling and far-reaching account of the media, propaganda, and the legacies of colonialism.

Beyond the Colonial Film Archive

By Tom Rice, author of Films for the Colonies: Cinema and the Preservation of the British Empire Back in 2007 I began work as a postdoctoral researcher with the British Film Institute …

Tom Rice is Senior Lecturer in Film Studies at the University of St Andrews. He is the author of White Robes, Silver Screens: Movies and the Making of the Ku Klux Klan.

"Offers an astute political analysis of colonial film's development in Britain and makes an outstanding contribution to film history. . . . a wonderfully rich resource for anyone interested in the field, an education for those who are unfamiliar with the subject and a must for historians’ shelves."—Journal of British Cinema and Television

"[T]his volume provides a sophisticated perspective on the transformations of colonial cinema through the lens of the [Colonial Film Unit] as part of a shifting context for representation and sovereignty."—Journal of Colonialism and Colonial History

“With this book, Rice makes the case for the importance of film to the wind-down of the empire and to independence movements of the 1960s.”—CHOICE

"Like other works on British colonial filmmaking, the narrative of the CFU [Colonial Film Unit] in Films for the Colonies explains how the simultaneous construction of the metropole and the colony through moving images was an essential process of British colonialism. What is unique about Rice’s approach is his effort to centralise colonialism within broader histories of British cinema, particularly by emphasizing the CFU’s work in relation to that of the canonical filmmaking of the British documentary movement. As such, Films for the Colonies is essential reading for scholars interested in the visual history of colonialism and the global history of documentary and other ‘useful’ genres."—Reviews in History

"The first in-depth study of the British Colonial Film Unit (CFU), it provides a meticulously researched survey of a cinema corps that has been largely neglected by historians of British film. . . . Films for the Colonies provides a sturdy foundation for future studies of the CFU, one that scholars can build upon to shed further light on the unit’s rich, underexplored body of surviving films."—Journal of Visual Culture

"This book shows the depth of available material and the kinds of media histories that can be researched and written based on that material."—Journal of Religion & Film

"This essential book, while very aware of race, seems to navigate an internal complexity between making visible the colonized subjects and the colonial agents outside the frame, and a disquiet in articulating the very violence of the racial representations within."

“It is deliciously ironic that an institution created to administer an empire through film should become the exemplary case of imperial cinema’s dissolution. Tom Rice’s account, which has the potential to be a touchstone for institutional and imperial histories, shows us how the British Colonial Film Unit was precisely such an organization.”—Priya Jaikumar, author of Where Histories Reside: India as Filmed Space and Cinema at the End of Empire

“Brings to light a treasure trove of archival sources and films in a synthetic perspective that clarifies lingering mysteries regarding the organization of the British colonial film units. This remarkable book adds significant complexity to our understanding of government-sponsored documentary cinema.”—Peter J. Bloom, author of French Colonial Documentary: Mythologies of Humanitarianism

Introduction
1. Beginnings: The Interwar Movement of Nonfiction Film
2. Film Rules: The Governing Principles of the Colonial Film Unit
3. Mobilizing an Empire: The Colonial Film Unit in a State of War
4. Moving Overseas: “Films for Africans, with Africans, by Africans”
5. Handover: Local Units through the End of Empire