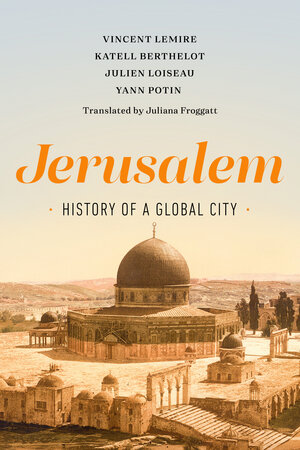 Jerusalem History of a Global City

An expansive history of Jerusalem as a cultural crossroads, and a fresh look at the urban development of one of the world's most mythologized cities.

Jerusalem is often seen as an eternal battlefield in the "clash of civilizations" and in endless, inevitable wars of religion. But if we abandon this limiting image when reviewing the entirety of its concrete urban history—from its beginnings to today—we discover a global city at the world's crossroads. Jerusalem is the common cradle of Judaism, Christianity, and Islam, whose long and intertwined pasts include as much exchange and reciprocal influence as conflict and confrontation. This synthetic account is the first to make available to the general public Jerusalem's whole history, informed by the latest archaeological finds, unexplored archives, and ongoing research and offering a completely renewed understanding of the city's past and geography. This book is an indispensable guide to understanding why the world converges on Jerusalem.

Vincent Lemire is Associate Professor of Contemporary History at Gustave Eiffel University, Director of the Open Jerusalem European Research Council project, and Director of the French Research Center in Jerusalem. His most recent book is Jerusalem 1900: The Holy City in the Age of Possibilities.

Katell Berthelot is a historian working on Jews and Judaism in the Hellenistic and Roman periods and Professor at the French National Center for Scientific Research and Aix-Marseille University. She is the author of In Search of the Promised Land? The Hasmonean Dynasty between Biblical Models and Hellenistic Diplomacy and Jews and Their Roman Rivals: Pagan Rome's Challenge to Israel.

Julien Loiseau is Professor of the History of the Medieval Islamic World at Aix-Marseille University and former Director of the French Research Center in Jerusalem. A historian and Arabist, he has devoted his research to Egypt, Palestine, and Ethiopia in the Middle Ages. He is the author of The Mamluks: Political Experience in Medieval Islam.

Yann Potin, a historian and archivist, is a Senior Research Fellow at the French National Archives and Associate Professor of Legal History at the Institute of Public Law and Political and Social Sciences at Sorbonne Paris North University. He is coeditor of France in the World: A New Global History.

Juliana Froggatt is an editor and translator who lives in Ferney-Voltaire, France.

"This, the umpteenth history of Jerusalem, is also in a sense the very first: never before, in fact, has the city been the object of a full-fledged effort that rigorously examines it from its origins. … A lively, precise, and handy book of great intelligence. … In the end, [it is the physical city itself] that is at the heart of this fine work. … What a great achievement indeed to have made this most labyrinthine of cities so readable."—Le Monde

"Very readable, very well informed, very well documented. … An important counterweight to the simplifications, myths, instrumentalization, … and hysterical readings of the city's status. … Recommended to anyone traveling to Israel-Palestine or who cares about [Jerusalem's] fate for good or for bad reasons."—LibreSens

"What else can be said about the history of Jerusalem? … What could be added to the monumental biography of the city written by the British historian Simon Sebag Montefiore? Many things, [the authors of this book] enthusiastically reply. … On the basis of little- or unexploited sources, … [they endeavor to] shed new light on a past too often reduced to the clash of religions, civilizations, and imperialisms. … Don't be mistaken: in this long history, … battles and conquests are of course central. … But in the shadow of these dramas, it is the daily cohabitation of the three monotheisms in a common melting pot to which the authors devote some of their most surprising pages."—Le Figaro


"Breaking with the discourse, more ideological than historical, of most books devoted to the city, the authors … offer the reader a fascinating survey that skillfully blends the history of everyday life with that of an ever-changing fantasy of the imagined city. … A thrilling book from beginning to end, which illuminates the dramas of the present."—L'Histoire

"Calmly and in accessible language, this book traces the [city's] long and complex history. … This unprecedented initiative of … Vincent Lemire and his colleagues … certainly deserves to be saluted, as it will be of great service to the many pilgrims, tourists, diplomats, and volunteers who visit Jerusalem."—La Croix

"Judaeans, Greeks, Romans, Byzantines, Arabs, Franks, Ottomans, English—all have left their mark on the city. The individual chapters review these periods and their contributions, providing a better understanding of the history of each site, shedding light on the relations between the different communities that have lived [in Jerusalem], and giving an idea of the magnitude of the challenge that Palestinians and Israelis must now take on in order to build the future of the Holy City."—Études
Read More >

Introduction. Spirits of Places, Fractures in Time: Toward a New History of Jerusalem
1. The Birth of a Holy City: 4000 BCE to Second Century CE
2. Roman Pantheon, Christian Reliquary, and Jewish Traditions: Second to Seventh Centuries
3. In the Empire of the Caliphs: Seventh to Eleventh Centuries
4. Jerusalem, Capital of the Frankish Kingdom: 1099–1187
5. From Saladin to Süleyman: The Islamization of the Holy City, 1187–1566
6. The Peace of the Ottomans: Sixteenth to Nineteenth Centuries
7. The Impossible Capital? Jerusalem in the Twentieth Century
Conclusion. The Memory of the Dead, the History of the Living