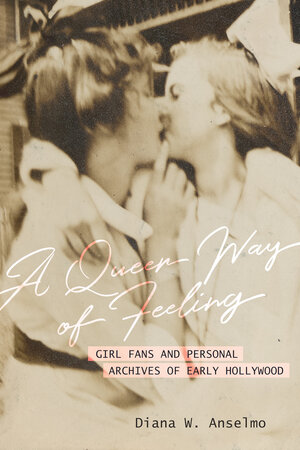 A Queer Way of Feeling gathers an unexplored archive of fan-made scrapbooks, letters, diaries, and photographs to explore how girls coming of age in the United States in the 1910s used cinema to forge a foundational language of female nonconformity, intimacy, and kinship. Pasting cross-dressed photos into personal scrapbooks and making love to movie actresses in epistolary writing, girl fans from all walks of life stitched together established homoerotic conventions with an emergent syntax of film stardom to make sense of feeling "queer" or "different from the norm." These material testimonies show how a forgotten audience engendered terminologies, communities, and creative practices that became cornerstones of media fan reception and queer belonging.

Diana W. Anselmo is a feminist film historian and a queer immigrant. Her work has been featured in a number of journals, including Screen, Camera Obscura, Film History, the Journal of Cinema and Media Studies, and the Journal of Women's History. Her research has received support from the Fulbright/Luso-American Development Foundation (FLAD), the National Endowment for the Humanities, Harvard University, and the International Association for Media and History, among others.

"Finally, a history of 'girl fans' that queers their passionate investment in the silent film era's 'girl stars.' Diana Anselmo's exhaustive and creative research teases out in glorious detail how these young women found a means to resist normative expectations of femininity and license their desires for same-sex intimacy through their admiration of the actresses of early Hollywood."—Hilary A. Hallett, author of Inventing the It Girl: How Elinor Glyn Created the Modern Romance and Conquered Early Hollywood

"Much work, both theoretical and historical, has been conducted to document the experiences of early film audiences, but no sustained approach of basing such a history principally on the personal correspondence, creative writing, and scrapbooks of early movie fans has yet been accomplished . . . until now. Anselmo brilliantly guides us through an astonishing array of nonnormative reception practices innovated and memorialized by a generation of adolescent girls and young women during Hollywood's first decade of emergence. A Queer Way of Feeling is both an open love letter to this generation and a radical act of remembrance that convincingly insists that their ardent pursuit of movie fandom's queer possibilities can no longer be denied or ignored."—Mark Lynn Anderson, author of Twilight of the Idols: Hollywood and the Human Sciences in 1920s America


"A rich and very valuable book. Anselmo does a fantastic job of melding American cultural history, gender and sexuality studies, film history, and medical and psychological research literature, bringing the work to a level that few film scholars attempt. The extraordinary level of this work raises the bar for future feminist film history and historical film reception studies."—Kathryn Fuller-Seeley, author of At the Picture Show: Small-Town Audiences and the Creation of Movie Fan Culture
Read More >

1. It Disquiets, It Delights: Same-Sex Attachments and Early Female Moviegoing
2. “Dear Flo”: Homoerotic Desire and Queer Identification in Private Fan Mail
3. “If I Were a Man”: Gender-Bending in Girls’ Published Fan Poems
4. Girls, Pick Up Your Scissors: The Queer Makings of the “Movie Scrap Book” Fad
5. Different from Others: Movie-Illustrated Diaries, Cross-Dressing, and Circulated
Discourses on Female Deviance
6. A Coding of Queer Delights: Gender Nonconformity in Girls’ Movie Scrapbooks
Epilogue: One of Us: The Corporatization of Female Fan Love and Labor