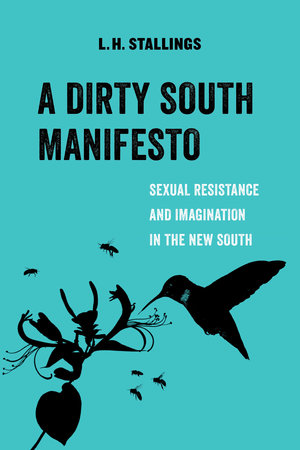 From the shutdown of Planned Parenthood clinics and rising rates of HIV to opposition to marriage equality and bathroom bills, the New South is the epicenter of the new sex wars. Antagonism toward reproductive freedom, partner rights, and transgender rights has revealed a new and unacknowledged era of southern reconstruction centered on gender and sexuality.

In A Dirty South Manifesto, L. H. Stallings celebrates the roots of radical sexual resistance in the New South—a movement that is antiracist, decolonial, and transnational. For people within economically disenfranchised segments of society, those in sexually marginalized communities, and the racially oppressed, the South has been a sexual dystopia. Throughout this book, Stallings delivers hard-hitting manifestos for the new sex wars. With her focus on contemporary Black southern life, Stallings offers an invitation to anyone who has ever imagined a way of living beyond white supremacist heteropatriarchy.

By L.H. Stallings, author of A Dirty South Manifesto: Sexual Resistance and Imagination in the New South

"An excellent addition to the existing literature on reproductive rights and sexual freedom."—Affilia: Journal of Women and Social Work

"In this brilliant, imaginative, and defiant manifesto, Stallings entices the reader into reimagining and rereading the South, specifically the Dirty South. Leaning in on southern hip-hop, Millie Jackson, and other forms of (deviant) southern culture, Stallings makes legible the multiple sites and literacies of sexual politics and resistance found throughout the new South. However, her path to freedom is not limited to public protest, social movements, and electoral politics; it also includes the underground, where strategies of decolonization and magic allow nonnormative joy, intimacy, and sexual pleasure to flourish. Stallings’s unflinching and creative look at the Dirty South challenges our current understandings of moral authority while unveiling a new vision of liberation and freedom."—Cathy J. Cohen, author of Punks, Bulldaggers, and Welfare Queens: The Radical Potential of Queer Politics?

"Always at the vanguard of critical work in sexuality studies, Stallings has produced one of the most important manifestos about queerness and southern-ness, about family and empire. For those familiar with and unsettled by the parameters set forth in Patsy Yaeger’s Dirt and Desire (2000), this manifesto is a necessary intervention. Stallings takes us where we need to go and returns to us our whole southern selves, arguing for renewed attention to the region and its cultural producers and products, and for a whole-scale dismissal of 'settler sexuality' that chokes the lifeblood out of this place we call home and the people we embrace who survive within it. What better place to home in on how to deal with white supremacy’s creep in these United States than the place in the nation where such ideologies flourish in a particular way? In these pages, life is indeed messy and sexy too, but along the way Stallings gives us back our lexicon and its theory to sustain us through what has arrived and is surely, also, yet to come."—Sharon P. Holland, author of The Erotic Life of Racism

“Stallings has a gift of cutting to the chase without sacrificing context or argument. This impressive book holds a mountain of history and insight into the deeply vexing region that is the South—neither vilifying it nor shying away from its warts. I can’t wait to teach it.”—E. Patrick Johnson, author of Appropriating Blackness: Performance and the Politics of Authenticity "Imploring each of us to become ‘a connoisseur of dirt,’ Stallings launches a call to arms on behalf of scholar-activists invested in contemporary queer studies of the U.S. South. A stellar contribution to the American Studies Now series."—Scott Herring, author of The Hoarders: Material Deviance in Modern American Culture
Read More >