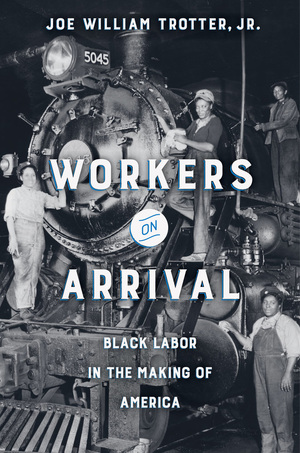 Workers on Arrival Black Labor in the Making of America

"An eloquent and essential correction to contemporary discussions of the American working class."—The Nation

From the ongoing issues of poverty, health, housing and employment to the recent upsurge of lethal police-community relations, the black working class stands at the center of perceptions of social and racial conflict today. Journalists and public policy analysts often discuss the black poor as “consumers” rather than “producers,” as “takers” rather than “givers,” and as “liabilities” instead of “assets.”

In his engrossing new history, Workers on Arrival, Joe William Trotter, Jr. refutes these perceptions by charting the black working class’s vast contributions to the making of America. Covering the last four hundred years since Africans were first brought to Virginia in 1619, Trotter traces black workers’ complicated journey from the transatlantic slave trade through the American Century to the demise of the industrial order in the 21st century. At the center of this compelling, fast-paced narrative are the actual experiences of these African American men and women. A dynamic and vital history of remarkable contributions despite repeated setbacks, Workers on Arrival expands our understanding of America’s economic and industrial growth, its cities, ideas, and institutions, and the real challenges confronting black urban communities today.

UC Press is happy to share that we have partnered with The Booksmith in San Francisco, CA to bring a series of virtual author events to life. Entitled UC Press Now: Urgent …

For Juneteenth—today’s holiday commemorating Union army general Gordon Granger’s reading of federal orders in Galveston, Texas on June 19th, 1865, proclaiming that Texan slaves were free (in light of the fact that …

Joe William Trotter, Jr., is Giant Eagle Professor of History and Social Justice and Founder and Director of the Center for Africanamerican Urban Studies and the Economy at Carnegie Mellon University. He is the author of Black Milwaukee and Coal, Class, and Color and past President of the Labor and Working Class History Association.

“Mr. Trotter has synthesized an eye-popping array of scholarship into a slim volume, one that should be read by . . . the general public, and especially by those whose bad-Twitter-argument-of-the-day calendar is turned to: ‘African-Americans have been superfluously aided by undue economic initiatives.’”—Pittsburgh Post-Gazette

“This book shows the fruitful results of decades of scholarship in the field. This vital contribution is particularly timely after a period in which ‘the working class’ has somehow become synonymous with white Americans in the middle of the country. In fact, African Americans have been central to that history, including now in a new global capitalist economy. With consummate skill and compression of prose, the book surveys the ‘lives and labor of black workers’ . . . A splendidly rigorous and authoritative text from an accomplished senior scholar.”—CHOICE

"Restores and presents the vast contributions of African American workers from the earliest days of the country, the 1600s, until the present. . . . A highly readable and accessible history that will be a classic in the field.”—Book Riot

“An eloquent and essential correction to contemporary discussions of the American working class. . . . Trotter’s achievement is to synthesize [a] rich body of historical scholarship into a single volume written with an eye to a general audience.”

"Workers on Arrival: Black Labor in the Making of America is the type of book that shapes an entire field of knowledge. It is the type of book that I wish every senior scholar would write: a book that only becomes possible to produce after a significant amount of time and effort in careful study, paying attention to the broad movements in the field and the thousands of nuances that it produces.”—Journal of Working-Class Studies

"Not just a welcome new synthesis of Black workers in urban America but an urgent history that seeks to overturn assumptions about who is part of the 'working class,' and indeed, who built America."—Journal of Social History

"Workers on Arrival in some ways functions both as a book on African American labor history and as a survey of much of black social and community history as well. . . . Trotter's sweeping overview serves as an entrée to the work of dozens of scholars who have transformed the field over the past half century."—Business History Review

"It is through this lens of racial capitalism, an intellectual framework that situates racism, patriarchy, and nationalism as the active ingredients forthe proper function of capitalism, that Workers on Arrival forces us to understand the making of the United States of America."—Ethnic and Racial Studies

"Few scholars have contributed more than Joe W. Trotter to Black labor history. His latest book, Workers on Arrival, is not only a brilliant synthesis by a master social historian but it marks a conceptual breakthrough by placing the black working-class—enslaved and "free"—at the center of the development of racial capitalism. Black workers were more than victims of rapacious violence and segregation; they were producers of wealth, the source of surplus value, fighters for economic justice. And now, in our neoliberal era of flexible labor and capital mobility, the future of Black workers is open to question. As journalists and pundits genuflect on the plight of the "white working-class," this is the book we should be reading. Profound, inspiring, and sobering."—Robin D. G. Kelley, author of Freedom Dreams: The Black Radical Imagination
"Drawing upon a century of scholarship, Workers on Arrival provides a compelling, comprehensive overview of black labor from slavery to the present. At the same time, the book restores African American workers—especially urban workers—to their central place in the history of the American economy and the broader history of world capitalism."—Jacqueline Jones, author of American Work: Four Centuries of Black and White Labor, University of Texas at Austin

"There is no way to read Workers On Arrival without seeing the forging of a nation long dependent on black labor—unfree and free. Joe Trotter does a masterful job of detailing the inextricable link among work, race, and nation."—Earl Lewis, coeditor of To Make Our World Anew: A History of African Americans

"A timely focus on the importance of black workers in the making of America. Workers on Arrival establishes the foundational role of black labor in the US economy. There is no one better positioned than Joe Trotter, Jr. to tell a history of this scale."—Leslie M. Harris, author of In the Shadow of Slavery

"Workers on Arrival makes a fantastic and well-timed contribution to labor and African American history and the history of American democracy. From slavery to the modern gig economy, black working-class men and women have transformed the raw materials of seed and soil, metal ore, wood, and coal, into food, buildings, and finished goods. It’s a great read and a stunning synthesis of the past four decades of scholarship in labor, African American, and political history."—Elizabeth Faue, author of Rethinking the American Labor Movement