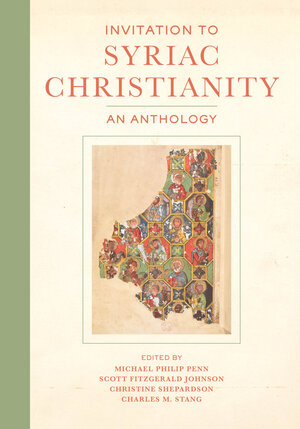 Invitation to Syriac Christianity An Anthology

Despite their centrality to the history of Christianity in the East, Syriac Christians have generally been excluded from modern accounts of the faith. Originating from Mesopotamia, Syriac Christians quickly spread across Eurasia, from Turkey to China, developing a distinctive and influential form of Christianity that connected empires. These early Christians wrote in the language of Syriac, the lingua franca of the late ancient Middle East, and a dialect of Aramaic, the language of Jesus. Collecting key foundational Syriac texts from the second to the fourteenth centuries, this anthology provides unique access to one of the most intriguing, but least known, branches of the Christian tradition.

Michael Philip Penn is  Teresa Hihn Moore Professor of Religious Studies at Stanford University. He is author of When Christians First Met Muslims: A Sourcebook of the Earliest Syriac Writings on Islam, Envisioning Islam: Syriac Christians in the Early Muslim World, and Kissing Christians: Ritual and Community in the Late Ancient Church.

Scott Fitzgerald Johnson is Joseph F. Paxton Presidential Associate Professor and Chair of Classics and Letters at the University of Oklahoma. He was awarded a Guggenheim Fellowship in 2018. He is author of Literary Territories: Cartographical Thinking in Late Antiquity andThe Life and Miracles of Thekla: A Literary Study and editor of The Oxford Handbook of Late Antiquity, among other volumes.

Christine Shepardson is Lindsay Young Professor and Department Head of Religious Studies at the University of Tennessee. She is author of Anti-Judaism and Christian Orthodoxy: Ephrem’s Hymns in Fourth-Century Syria and Controlling Contested Places: Late Antique Antioch and the Spatial Politics of Religious Controversy and coeditor of Dealing with Difference: Christian Patterns of Response to Religious Rivalry in Late Antiquity and Beyond.

Charles M. Stang is Professor of Early Christian Thought and Director of the Center for the Study of World Religions at Harvard Divinity School. He is author of Our Divine Double and Apophasis and Pseudonymity in Dionysius the Areopagite: “No Longer I.”

​"A remarkable tour of Syriac Christianity over its first 1500 years. This anthology provides a sumptuous array of treasures introduced with elegant clarity and explicated with incisive grasp. At a time when we seek to understand Christian history in global terms, this collection is a game changer."—Susan Ashbrook Harvey, Willard Prescott and Annie McClelland Smith Professor of Religion and History, Brown University

"Invitation to Syriac Christianity is a remarkable resource not only for Syriac scholars and students but also for the public and members of modern Syriac churches, who will thus have easier access to their heritage and traditions. As the first complete anthology of Syriac literature in English translation, it offers unique access to the spiritual realm of the Syriac tradition."—Mor Polycarpus, Archbishop of the Syriac Orthodox Church in The Netherlands

"This book succeeds magnificently in introducing the rarely studied world of a major Christian community. Well-chosen and carefully presented extracts capture the thrill of a brilliant culture placed at the crossroads of Asia. Resonant religious imagery and daring mystical speculations, impassioned theological debate, the heroism of male and female martyrs and ascetics, open dialogue with religious rivals, disabused accounts of the clash of empires: this book has it all. It decisively alters the balance of scholarship in exciting new directions and adds an entire new dimension to the history of religion in late antique and medieval times."—Peter Brown, Professor Emeritus of History, Princeton University