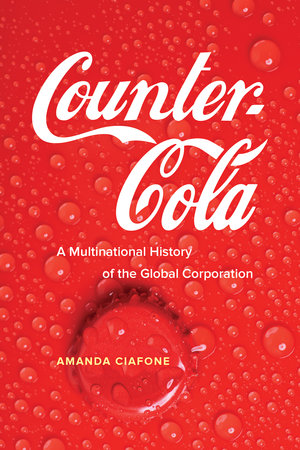 Counter-Cola A Multinational History of the Global Corporation

Counter-Cola charts the history of one of the world’s most influential and widely known corporations, The Coca-Cola Company. Over the past 130 years, the corporation has sought to make its products, brands, and business central to daily life in over 200 countries. Amanda Ciafone uses this example of global capitalism to reveal the pursuit of corporate power within the key economic transformations—liberal, developmentalist, neoliberal—of the twentieth and twenty-first centuries.

Coca-Cola's success has not gone uncontested. People throughout the world have redeployed the corporation, its commodities, and brand images to challenge the injustices of daily life under capitalism. As Ciafone shows, assertions of national economic interests, critiques of cultural homogenization, fights for workers’ rights, movements for environmental justice, and debates over public health have obliged the corporation to justify itself in terms of the common good, demonstrating capitalism’s imperative to either assimilate critiques or reveal its limits.

Amanda Ciafone is Assistant Professor of Media and Cinema Studies at the University of Illinois at Urbana-Champaign.

“Perhaps more than any other corporation on earth, the Coca-Cola Company has associated the concept of the ‘good life’ with the interests of American capitalism. Buy a coke, be part of the dream. In this timely book, Amanda Ciafone shows how, by constantly shifting its all-important image to fit the times, the company—like capitalism—thrives as it floats above both critics and mistakes.”—Maude Barlow, author of Blue Future: Protecting Water for People and the Planet Forever

“Counter-Cola tells the story of how a junk diet became a staple across the world and how movements have grown to stop its water theft and the hijack of our food and health policies. Having worked with Mylamma and the community in Plachimada that shut Coke down, I know coca colonisation can be resisted."—Vandana Shiva, author of Who Really Feeds the World? The Failures of Agribusiness and the Promise of Agroecology

“By exploring how Coca-Cola shaped global capitalism, and how global capitalism in turn created the world’s most famous corporation, Ciafone’s dazzling account alters our understanding of the modern world, corporate power, and political struggle. Counter-Cola is an extraordinarily important book for understanding not only how capitalism and one of its most visible expressions have colonized the planet but how people throughout the world have pushed back against the company’s imperial designs. Ciafone delivers a highly readable and compelling guide for anyone interested in understanding and transforming the world in which we live.”— Steve Striffler, author of Solidarity: Latin America and the US Left in the Era of Human Rights


“Grappling with one of the most iconic global corporations, this book provides a rich and eminently readable account of the interplay between corporate power and resistance. Through impeccable archival and ethnographic research, it untangles the many intricate connections between this giant corporation and social movements in the making of global capitalism.”—Zaheer Baber, author of Secularism, Communalism, and the Intellectuals

“Long before Nike, McDonald's, Apple, Walmart, and Amazon all redefined corporate salesmanship on their own terms, the Coca-Cola Company hatched a global market model through its franchise system, doctrine of rights management, and branding feats. In this compelling contribution to the new history of capitalism, Ciafone does a brilliant job of narrating the social and cultural consequences of these early moves.”—Andrew Ross, author of Creditocracy and the Case for Debt Refusal
Read More >

Introduction
1 • The Coca-Cola Bottling System and the Logics of
the Franchise
2 • Mediating Coca-Colonization: Negotiating National Development
and Difference in Coca-Cola’s Postwar Internationalization
3 • “I’d Like to Buy the World a Coke”: The “Real Thing” and the
Revolutions of the 1960s
4 • Indianize or Quit India: Nationalist Challenges to
Coca-Cola in Postcolonial India
5 • A Man in Every Bottle: Labor and Neoliberal Violence in
Colombian Coca-Cola Bottling
6 • Water for Life, Not for Coca-Cola: Commodification, Consumption,
and Environmental Challenges in Neoliberal India
7 • CSR: Corporate Social Responsibility and Continued
Social Resistance, A Nonconclusion