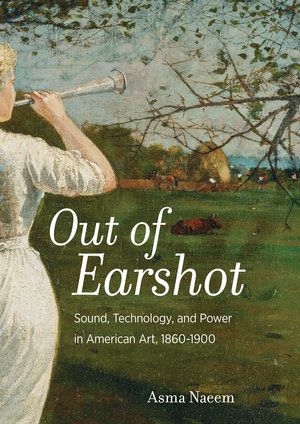 Out of Earshot offers a reconfiguration of three of the nineteenth century’s most prolific painters: Winslow Homer (1836–1910), Thomas Eakins (1844–1916), and Thomas Dewing (1851–1939). Asma Naeem considers how these painters turned, in ways significant for their individual artistic ventures, to themes of sound and listening throughout their careers. She shows how the aural dimension of these artists’ pictures was an ideological product of period class, gender, cultural, racial, and technological discourses. Equally important, by looking at such materials as the artists’ papers, scientific illustrations, and technological brochures, Naeem argues that the work of these painters has complex and previously unconsidered connections to developments in sound and listening during a period when unprecedented innovation in the United States led to such inventions as the telegraph and phonograph and forged a technological narrative that continues to have force in the twenty-first century. Naeem's unusual approach to the work of these three well-known American artists offers a transformative account of artistic response during their own era and beyond.

UC Press is pleased to have a number of our authors participate in this year’s College Art Association’s sessions.

Asma Naeem is the Eddie C. and C. Sylvia Brown Chief Curator at the Baltimore Museum of Art. She is the author and editor of Black Out: Silhouettes Then and Now.

"...Out of Earshot is not only an accomplished but also a timely scholarly contribution."—caa.reviews

“On the friendship between sound and silence in late nineteenth-century American art. The increasingly loud world meets the self-conscious quiet of painting, and sound and silence merge and mix—uneasily, experimentally, with strange aesthetic effects. An original account, written by a gifted art historian."—Alexander Nemerov, Carl and Marilynn Thoma Provostial Professor in the Arts and Humanities, Stanford University

"Asma Naeem’s brilliantly original rereading of late nineteenth-century American art reveals how major artists of the period used implied sound in a non-acoustic medium to reflect on the challenges and opportunities facing communication in the noisy age of the telephone, typewriter, and phonograph. Her fresh interpretations of well-known works, showing the previously unsuspected role that sound plays in them, remind us that who gets heard and who doesn’t in any social exchange is a matter of political significance."—David M. Lubin, author of Grand Illusions: American Art and the First World War