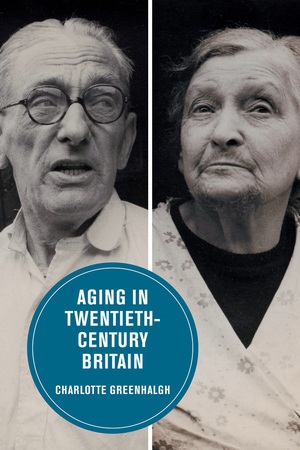 As today’s baby boomers reach retirement and old age, this timely study looks back at the first generation who aged in the British welfare state. Using innovative research methods, Charlotte Greenhalgh sheds light on the experiences of elderly people in twentieth-century Britain. She adds further insights from the interviews and photographs of celebrated social scientists such as Peter Townsend, whose work helped transform care of the aged. A comprehensive and sensitive examination of the creative pursuits, family relations, work lives, health, and living conditions of the elderly, Aging in Twentieth-Century Britain charts the determined efforts of aging Britons to shape public understandings of old age in the modern era.

“Charlotte Greenhalgh’s Aging in Twentieth-Century Britain makes a signal contribution to modern British history by recovering the lives, voices, and agency of the elderly in the twentieth century. It is an acute and moving account of people who have been, until now, largely left out of the historical narrative.”—Stephen Brooke, author of Sexual Politics: Sexuality, Family Planning, and the British Left from the 1880s to the Present Day

“Aging in Twentieth-Century Britain is an outstanding history of the emotional, social, institutional, family, embodied, and narrated lives of older people across twentieth-century Britain. It demonstrates not just that older lives matter historically but also that old age is itself historically contingent and has been actively constituted in tandem with particular welfare and medical discourses. This is an important and innovative book based on meticulous scholarship and a sensitive reading of sources.”—Claire Langhamer, author of The English in Love: The Intimate Story of an Emotional Revolution

“This important and highly original book takes the history of both old age and social research in new directions. Imaginative and innovative throughout, it is particularly noteworthy for offering a careful reanalysis of the social research testimony collected directly from elderly people in the past. The result is that these people’s lives are understood on their own terms, rather than through the prism of social policy debates or the claims of social science experts.”—Jon Lawrence, author of Electing Our Masters: The Hustings in British Politics from Hogarth to Blair

Introduction: Aging and Twentieth-Century Britain
1. Experts and the Elderly: Social Research on Old Age
2. Talking with Peter Townsend: Elderly Britons at Home
3. Into the Institution: Residential Care for the Aged
4. “Making the Best of My Appearance”: Grooming in Old Age
5. Games with Time: Autobiography and Aging
Epilogue