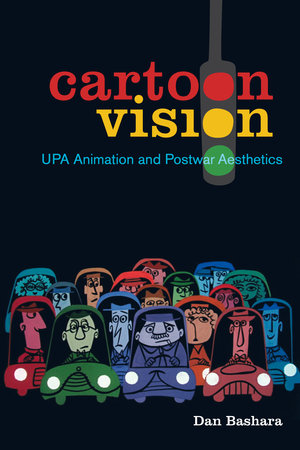 In Cartoon Vision Dan Bashara examines American animation alongside the modern design boom of the postwar era. Focusing especially on United Productions of America (UPA), a studio whose graphic, abstract style defined the postwar period, Bashara considers animation akin to a laboratory, exploring new models of vision and space alongside theorists and practitioners in other fields. The links—theoretical, historical, and aesthetic—between animators, architects, designers, artists, and filmmakers reveal a specific midcentury modernism that rigorously reimagined the senses. Cartoon Vision invokes the American Bauhaus legacy of László Moholy-Nagy and György Kepes and advocates for animation’s pivotal role in a utopian design project of retraining the public’s vision to better apprehend a rapidly changing modern world.

Dan Bashara is an instructor of cinema and media studies at DePaul University.

"Cartoon Vision treats animation with all the seriousness it deserves, and in so doing captures a messier modernism that rightly brings avant-garde practice into contact with a more diverse field of popular taste."—Oxford Art Journal

"An inspired account of the experimental design idiom of the legendary UPA studios. Cartoon Vision frames modern animation as part of an urgent project to reorganize vision in a postwar climate of sensory overstimulation. By showing us what Mr. Magoo owed to Moholy-Nagy, Bashara’s bold interdisciplinary study unsettles familiar stories about midcentury modernism."—Justus Nieland, author of Happiness by Design: Modernism and Media in the Eames Era

“By repositioning United Productions of America (UPA)—one of the twentieth century’s most important animation studios—in a history that goes beyond animation and American cinema to concurrent movements in interwar American art and mid-century design thinking, Cartoon Vision makes a critical contribution to the history of American visual culture at large. It is sure to become a valuable source for historians of many stripes, from film and media studies to art and design to American modernism."—Brian R. Jacobson, author of Studios Before the System: Architecture, Technology, and the Emergence of Cinematic Space