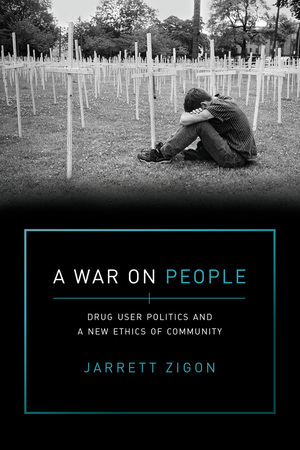 If we see that our contemporary condition is one of war and widely diffused complexity, how do we understand our most basic ethical motivations? What might be the aims of our political activity? A War on People takes up these questions and offers a glimpse of a possible alternative future in this ethnographically and theoretically rich examination of the activity of some unlikely political actors: users of heroin and crack cocaine, both active and former. The result is a groundbreaking book on how anti–drug war political activity offers transformative processes that are termed worldbuilding and enacts nonnormative, open, and relationally inclusive alternatives to such key concepts as community, freedom, and care.

Read the author's article about the opiod crisis on Open Democracy.

Jarrett Zigon is the William and Linda Porterfield Professor of Bioethics and Professor of Anthropology at the University of Virginia. His two most recent books are Disappointment: Toward a Critical Hermeneutics of Worldbuilding and "HIV is God’s Blessing": Rehabilitating Morality in Neoliberal Russia.

"For those interested in a theoretically complex and ambitious contribution to the anthropology of ethics and political anthropology, this book has much to offer."—Journal of the Royal Anthropological Institute

"What would it mean for our conceptions of politics to have an anthropology not just of how people are, but of what they are working to become? How can anthropology capture the space in which people live ahead of themselves? This crucial, wholly original, and theoretically generative book shows us how key these questions are for the future of social thought and political life."—Joel Robbins, Sigrid Rausing Professor of Social Anthropology, University of Cambridge "This theoretically daring, imaginative, and empirically grounded book leads the way to a new era of philosophical anthropology.  Thoroughly inspiring!"—Miriam Ticktin, Professor of Anthropology, The New School for Social Research "This is a remarkable and thought-provoking work."—Talal Asad, Distinguished Professor of Anthropology Emeritus, City University of New York, and author of On Suicide Bombing and Formations of the Secular "Jarrett Zigon’s anthropology of potentiality bears all the hallmarks of his rich writing style with its close weaving of the philosophical, the empirical, and the political. Anthropologists have traditionally looked for alternative politics in the spaces of radical alterity. This book widens this to include the spaces of the 'unlikely.' The unlikely alter-political source here is the world of heavy drug users."—Ghassan Hage, Future Generation Professor of Anthropology, University of Melbourne, and author of Alter-Politics: Critical Anthropology and the Radical Imagination

Introduction: On War and Potentiality
1. The Drug War as Widely Diff used Complexity
2. “Addicts” and the Disruptive Politics of Showing
3. A Community of Those without Community
4. Disclosive Freedom
5. Attuned Care
Epilogue: Otherwise