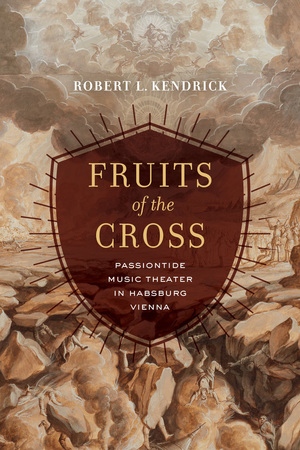 Fruits of the Cross Passiontide Music Theater in Habsburg Vienna

In this first detailed study of seventeenth-century sepolcri—sacred operas written for court performance on Holy Thursday and Good Friday—Robert L. Kendrick delves into the political and artistic world of Habsburg Vienna, in which music and ritual combined on the stage to produce a thoroughly original art form based on devotion to Christ’s Tomb. Through the use of allegorical characters, the musical dramas ranged from the devotionally intense, to the theologically complex, to the ugly anti-Jewish, but played a unique role in making Passion piety relevant to wider cultural concerns. Fruits of the Cross suggests that understanding the sepolcri has implications for the theatricalization of devotion, the power of allegory, the role of queenship in court ideology, the interplay between visuality and music, and not least the intellectual centrality of music theater to court self-understanding.

by Robert L. Kendrick, author of Fruits of the Cross: Passiontide Music Theater in Habsburg Vienna This post is being written just at the time of the liturgical year at which the pieces …

by Robert L. Kendrick, author of Fruits of the Cross: Passiontide Music Theater in Habsburg Vienna Over the course of researching my book on musical devotion sparked by the ritual adoration of …

Robert L. Kendrick teaches music history and ethnomusicology at the University of Chicago.

"Perhaps the most striking aspect of Kendrick’s work is the way in which it transcends the boundaries of conventional scholarly genres. He takes a topic that seems at first blush to be outside the musicological mainstream and not only illuminates it, but uses it as a window onto a world of fascinating ideas about early modern music, culture, religion, dynastic tradition, and even fiscal policy."—Steven Saunders, Professor of Music, Colby College

"This book is a richly documented and engagingly written study of the musical dramas performed before representations of the sepulcher as part of the Holy Week ritual at the Habsburg court in Vienna between 1660 and 1711. By examining the extant libretti, musical scores, set designs, and artistic renderings of the stages within the context of contemporary religious commentaries, European political history, and synchronous musical and literary conventions, Kendrick masterfully unmasks the distinctive role of the sepulcher drama in Habsburg expressions of piety, public penitence, and imperial statecraft."—Christine Getz, author of Mary, Music, and Meditation: Sacred Conversations in Post-Tridentine Milan

"Kendrick’s brilliant study of the Passiontide music of the Habsburg court in Vienna (1660-1711) will be of crucial interest not only to musicologists and theater historians but also to art historians for the light it casts on the forms and functions of liturgical spectacle, for its discussion of new paradigms of affective allegory, and for its examination of the visual topoi of lament, sin, and loss."—Walter S. Melion, Asa Griggs Candler Professor of Art History, Emory University

Introduction
1. Passion and Theater
2. Devotional Strategies
3. Social Others and Selves
4. Music and Its Affects
Epilogue: The Power of the Cross