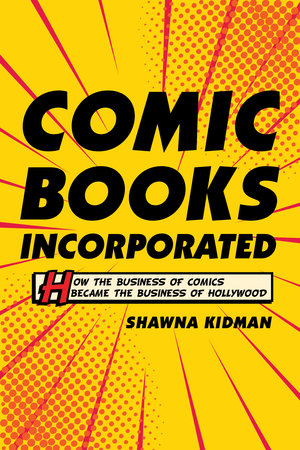 Comic Books Incorporated tells the story of the US comic book business, reframing the history of the medium through an industrial and transmedial lens. Comic books wielded their influence from the margins and in-between spaces of the entertainment business for half a century before moving to the center of mainstream film and television production. This extraordinary history begins at the medium’s origin in the 1930s, when comics were a reviled, disorganized, and lowbrow mass medium, and surveys critical moments along the way—market crashes, corporate takeovers, upheavals in distribution, and financial transformations. Shawna Kidman concludes this revisionist history in the early 2000s, when Hollywood had fully incorporated comic book properties and strategies into its business models and transformed the medium into the heavily exploited, exceedingly corporate, and yet highly esteemed niche art form we know so well today.

by Shawna Kidman, author of Comic Books Incorporated: How the Business of Comics Became the Business of Hollywood Black Panther, the first comic book movie to be nominated for a Best Picture …

Shawna Kidman is Assistant Professor of Communication at the University of California, San Diego.

"The field needs studies like this, and it needs academics like Kidman who take on the sometimes unglamorous task of exposing the frames – the structures and infrastructures – within which, and between which, the colourful figures of comics and screen so fluidly move."—Times Higher Education

"Comic Books Incorporated chronicles the rise of the comic book business by documenting its emergence as a cultural product. Highlighting the transmedia infrastructures that made comic books possible, Kidman discusses comic books and their history as a medium, how comic books connect to politics and society, and the rise of comic book fan culture . . . Highly recommended."—Choice

"Kidman’s methodology provides a fresh and exciting contribution to our understanding of the relationship between comics and Hollywood in the twenty-first century."—Media Industries Journal

“Comic Books Incorporated brings an industrial-history perspective to comics studies, addressing aspects, such as copyright, licensing, distribution, regulation, and creative networks, that often have been ignored. Comics are integral to today’s media landscape, but this account thoughtfully outlines how they became so and sheds light on their paradoxical status as both niche and mainstream content. Comic Books Incorporated is rock solid in its historical contribution and yet accessible to general readers seeking to know more about the business considerations that shaped their favorite comics publishers.”—Henry Jenkins, author of Convergence Culture: Where Old and New Media Collide


“A much-needed book. Its singular focus on institutional history, encompassing financial and legal histories of the industry, gives it freshness and real value.”—Scott Bukatman, author of Hellboy’s World: Comics and Monsters on the Margins

“Shawna Kidman makes fascinating and important connections between comics publishing and distribution and wider issues in media culture that scholars haven’t made or even approached before.”—Derek Kompare, editor of Making Media Work: Cultures of Management in the Entertainment Industries

“An extraordinary achievement and a major contribution to the field of film and media studies.”—Eric Hoyt, author of Hollywood Vault: Film Libraries before Home Video