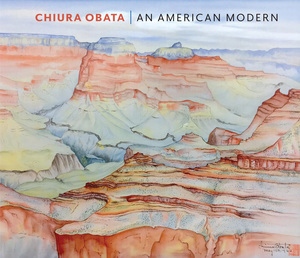 Chiura Obata (1885–1975) was one of the most significant Japanese American artists working on the West Coast in the last century. Born in Okayama, Japan, Obata emigrated to the United States in 1903 and embarked on a seven-decade career that saw the enactment of anti-immigration laws and the mass incarceration of Japanese Americans during World War II. But Obata emerged as a leading figure in the Northern California artistic communities, serving not only as an influential art professor at UC Berkeley for nearly twenty years, but also as a founding director of art schools in the internment camps. With a prodigious and expansive oeuvre, Obata’s seemingly effortless mastery of, and productive engagement with, diverse techniques, styles, and traditions defy the dichotomous categorizations of American/European and Japanese/Asian art. His faith in the power of art, his devotion to preserving the myriad grandeur of what he called “Great Nature,” and his compelling personal story as an immigrant and an American are all as relevant to our contemporary moment as ever.

This catalogue is the first book surveying Chiura Obata’s rich and varied body of work that includes over 100 beautiful images, many of which have never been published. It also showcases a selection of Obata’s writings and a rare 1965 interview with the artist. The scholarly essays by ShiPu Wang and the other contributors illuminate the intense and productive cross-cultural negotiations that Obata’s life and work exemplify, in the context of both American modernism and the early twentieth-century U.S. racio-ethnic relations—a still-understudied area in American art historical scholarship.

Published in association with the Art, Design and Architecture Museum, UC Santa Barbara.

“The exhibition catalog fairly glows with transcendent images, many of which are nominally landscapes that are less descriptive than visionary reactions to the natural world.” —Charles Desmarais, San Francisco Chronicle Chiura Obata …

Chiura Obata was one of the most significant Japanese American artists of the twentieth century. Chiura Obata: An American Modern, is a major retrospective of his work with an extensive traveling schedule. Appropriately, …

ShiPu Wang is Professor of Art History and Visual Culture, Founding Faculty of the Global Arts Studies Program, and Founding Director of UCM Art Gallery at the University of California, Merced. He is the author of Becoming American? The Art and Identity Crisis of Yasuo Kuniyoshi, and The Other American Moderns: Matsura, Ishigaki, Noda, Hayakawa.

“The exhibition catalog fairly glows with transcendent images, many of which are nominally landscapes that are less descriptive than visionary reactions to the natural world.”—Charles Desmarais, San Francisco Chronicle

"Obata’s work, a marvel of invention, nuance and emotional resilience, is the subject of a SmithsonianAmerican Art Museum exhibition . . . it’s worth looking up his work online or purchasing the catalogue for the exhibition, and reveling in the poetic economy of Obata’s painting, and his deft distillation of this country’s natural and urban wonders into masterful watercolors and pen and ink drawings."—Washington Post

"...a quietly revolutionary exhibition . . . . Chiura Obata’s massive body of work is rarely exhibited and, until now, has never had a major retrospective. . . . the opportunity to consider Obata as a major artist within the canon of American art, and more widely within the dominant canon of Western art and art history, and therefore deserving of a traditional retrospective, is what makes this exhibition revolutionary."—Panorama: Journal of the Association of Historians of American Art

"The catalogue is the first book to survey Chiura Obata's rich and varied works from his seven-decade career, and includes more than 100 images, many of which have never been published before."—ArtDaily.org

"The exhibition mixes beautiful images with documentary history, iconic American landscapes with incredible American failure. It highlights immigrants’ important contributions while not shying away from the realities of the experience. And it contests the notion of the American canon of art even as it seeks to broaden it."—The Washington Diplomat

"Looking at this retrospective exhibit, it’s hard to believe it all came from the same artist. Obata’s skillset was vast, as were his subjects. Traditional Japanese ink paintings rest along innovative woodblock pieces and large paintings of Yosemite National Park. Obata also combined these techniques in ways that are equal parts inspiring and confounding. It’s made Obata a difficult artist to classify. It’s also what made him so good."—Deseret News

"An American Modern has a lot of firsts. It’s the first touring exhibition of Obata’s work that includes work from all decades of his working life. It’s also the first time his works have been presented as a collective retrospective in Japan, since they’ve only shown in fragments before and not always translated. But perhaps most importantly, one of the next stops for this exhibition will be the Smithsonian, which marks Obata as an American Modernist in the larger artistic canon, a place he has every right to be, recognition long overdue."—Slug Magazine