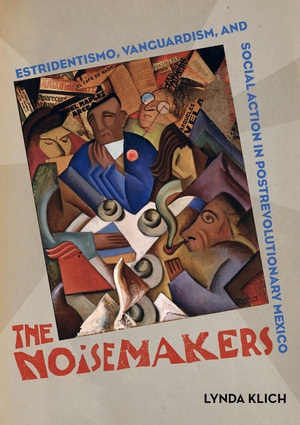 The Noisemakers Estridentismo, Vanguardism, and Social Action in Postrevolutionary Mexico

The Noisemakers examines Estridentismo, one of Mexico’s first modern art and literary movements. Founded by poet Manuel Maples Arce, Estridentismo spurred dynamic collaborations and debates among artists, writers, and intellectuals during the decade following the Mexican Revolution. Lynda Klich explores the paradoxical aims of the movement’s writers and artists, who deployed manifestos, journals, and cubo-futurist forms to insert themselves into international vanguard networks as they simultaneously participated in the nationalist reconstruction of the 1920s. In crafting a cosmopolitan Mexican identity, Estridentista artists both circulated images of modern technologies and urban life and updated such traditional subjects as masks and Mexican types. Klich reads the movement’s radical cultural production as a call for active sociopolitical engagement and characterizes Estridentismo as an ambitious program for national cultural and social modernity in the early twentieth century. Exploring the tensions that emerged from these divergent cosmopolitan and local proposals, The Noisemakers brings Mexico into the dialogue of global modernisms.

By Lynda Klich, author of The Noisemakers: Estridentismo, Vanguardism, and Social Action in Postrevolutionary Mexico I still remember the feeling I had when in 1997, in Mexico City researching for the first …

Lynda Klich is Assistant Professor of Art History at Hunter College, City University of New York, and Curator of the Leonard A. Lauder Postcard Collection.

"The Noisemakers is a totally appropriate qualifier to make known to a broader profile of readers the international echoes of the first Mexican avant-garde. In a rigorous academic investigation, the author in six chapters takes a complete tour through the history of the architects of the movement, their intellectual connections, their affinities and differences, their field of action, and collaborative practices."—Latin American and Latinx Visual Culture

"Lynda Klich’s The Noisemakers offers a deep and nuanced investigation of the relationship between local post-revolutionary visual languages, the international avant-garde, and Estridentismo—a multi-disciplinary group of visual and performing artists, poets, writers, and musicians that emerged in 1921 in Mexico. Her work broadens our understanding of the historical moment that nurtured the Estridentista, situates them solidly within both local and international avant-garde contexts, and skillfully positions Estridentismo as part of a broad program for societal reform in 1920s Mexico."—Art Inquiries

"In The Noisemakers, Lynda Klich unpacks the nuances of the Estridentista movement and its protagonists with respect to the visual art and ideology of the postrevolutionary period and its international context. Interweaving her careful visual, literary, and documentary analysis with its historical and aesthetic context, she provides a key contribution to the historiography of modern Mexican art through a new reading of the dynamic insertion of this movement’s visual, verbal, and social strategies, particularly as expressed through muralism, easel painting, and printmaking, in relation to other avant-garde artistic currents and political initiatives of the period.”—Karen Cordero Reiman, Professor Emerita, Universidad Iberoamericana, Mexico City, and author of Another Promised Land: Anita Brenner's Mexico


"A fresh and innovative analysis of one of the noisiest artistic movements anywhere in Latin America in the 1920s. Lynda Klich explores how the avant-garde strategies of the Estridentistas played out in the multifaceted art world of postrevolutionary Mexico, balancing nationalist pro-worker politics with cosmopolitan aesthetic concerns and refracting but never duplicating ideas generated in Europe and the United States."—James Oles, Wellesley College, author of Art and Architecture in Mexico
Read More >