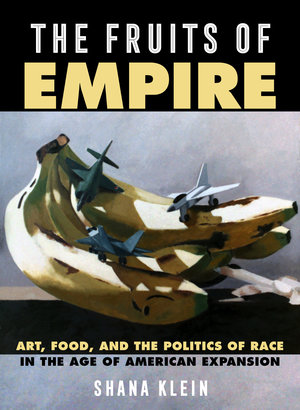 The Fruits of Empire Art, Food, and the Politics of Race in the Age of American Expansion

The Fruits of Empire is a history of American expansion through the lens of art and food. In the decades after the Civil War, Americans consumed an unprecedented amount of fruit as it grew more accessible with advancements in refrigeration and transportation technologies. This excitement for fruit manifested in an explosion of fruit imagery within still life paintings, prints, trade cards, and more. Images of fruit labor and consumption by immigrants and people of color also gained visibility, merging alongside the efforts of expansionists to assimilate land and, in some cases, people into the national body. Divided into five chapters on visual images of the grape, orange, watermelon, banana, and pineapple, this book demonstrates how representations of fruit struck the nerve of the nation’s most heated debates over land, race, and citizenship in the age of high imperialism.

In this edition of our UC Press Editor Spotlight Series, we sat down with Art History Editor Archna Patel to discuss her vision for our Art list, how she’s supporting and responding …

Shana Klein is Assistant Professor of Art History at Kent State University. She is the recipient of several research fellowships from the Smithsonian American Art Museum, American Council of Learned Societies, Henry Luce Foundation, and Georgia O’Keeffe Museum, among others.

“Richly illustrated and supported with meticulous research, The Fruits of Empire demonstrates the essential need to understand the history and politics behind our food consumption. In the midst of a national reckoning with racism in the United States generally and in the arts specifically, we as art historians need to use our scholarly platforms to raise consciousness about the racist and nativist origins of our national visual culture. As Klein’s book deftly demonstrates in the context of the fruit industry, images matter. But, as she also argues, so do Black, Indigenous, Asian, and Latinx lives.”

“Klein offers a concrete and approachable doorway to a discussion and study of race in America. She tells a compelling story, devoid of jargon and not requiring specialized knowledge, while still grounded in rigorous research.”—Food, Culture & Society

"The Fruits of Empire is a shrewdly articulated body of research. Shana Klein tells these stories with accessible panache and much conceptual originality. . . . In an enterprising new field, her book has already set an exacting standard."

—The World of Fine Wine

“The selection of works in The Fruits of Empire leaves little place for humor, irony, or disapproval. Part of the reason for Klein’s largely deterministic interpretation may well lie in the absence of any attempt at classifying visual images and the different values and aims that propel advertisement (sales), painting (aesthetics), and photography (record). Yet, if Klein does not capture the entire, complicated story of art and imperial expansion, she tells an important and often sorry part of it.”

"A must-read! This is a refreshing and critical contribution to food studies scholarship, and I have yet to see another book that tackles the representational strategies of the food industry or food in mass culture as intelligently or brilliantly."—Marcia Chatelain, author of Franchise: The Golden Arches in Black America

"This is a pioneering study. Investigations into food and its cultural meanings are not new, but the marriage of food studies to visual studies, as deftly demonstrated by Shana Klein's nuanced and original book, is a breakthrough for the scholarship."—Katherine Manthorne, Professor of Art History, Graduate Center of the City University of New York

Introduction
1. Westward the Star of Empire: California Grapes and Western Expansion
2. The Citrus Awakening: Florida Oranges and the Reconstruction South
3. Cutting Away the Rind: A History of Racism and Violence in Representations of Watermelon
4. Seeing Spots: The Fever for Bananas, Land, and Power
5. Pineapple Republic: Representations of the Dole Pineapple from Hawaiian Annexation to Statehood
Conclusion: New Directions in Scholarship on Food in American Art