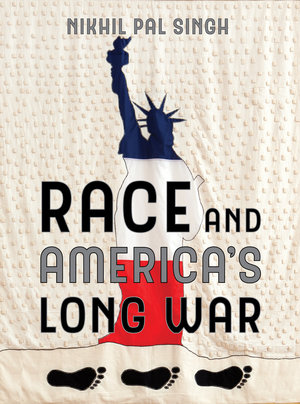 Donald Trump’s election to the U.S. presidency in 2016, which placed control of the government in the hands of the most racially homogenous, far-right political party in the Western world, produced shock and disbelief for liberals, progressives, and leftists globally. Yet most of the immediate analysis neglects longer-term accounting of how the United States arrived here. Race and America’s Long War examines the relationship between war, politics, police power, and the changing contours of race and racism in the contemporary United States. Nikhil Pal Singh argues that the United States’ pursuit of war since the September 11 terrorist attacks has reanimated a longer history of imperial statecraft that segregated and eliminated enemies both within and overseas. America’s territorial expansion and Indian removals, settler in-migration and nativist restriction, and African slavery and its afterlives were formative social and political processes that drove the rise of the United States as a capitalist world power long before the onset of globalization. Spanning the course of U.S. history, these crucial essays show how the return of racism and war as seemingly permanent features of American public and political life is at the heart of our present crisis and collective disorientation.

This Fall season UC Press is pleased to be publishing paperback editions of critically acclaimed texts from leading scholars, with topics ranging from histories of 20th-century fascist and contemporary populist movements, to …

Nikhil Pal Singh is Associate Professor of Social and Cultural Analysis and History at New York University and the founding faculty director of the NYU Prison Education Program. Singh is the editor of Climbin’ Jacob’s Ladder: The Black Freedom Movement Writings of Jack O’Dell and the author of Black Is a Country: Race and the Unfinished Struggle for Democracy, winner of the Liberty Legacy Foundation Award from the Organization of American Historians and the Norris and Carol Hundley Prize from the Pacific Coast Branch of the American Historical Association.

“...[Race and America's Long War contains] a wealth of ideas that are vitally important to understanding the current sociopolitical moment.”—Pasatiempo

“The components of this story have been told separately elsewhere; Singh’s achievement is to synthesize a broad swathe of scholarship into a singular sweeping argument. . . . Race and America’s Long War effectively consolidates the existing scholarship on racial capitalism and opens up new avenues of exploration in connecting racism and war. For these reasons, it is a remarkable work.”—Race & Class

“In this sweeping, erudite, and much-needed book, Nikhil Pal Singh obliterates any myth of American peace, revealing instead that the thread tying America’s past and present is long and continuous war—hot, vicious, global, and racial. Linking domestic and foreign terrains of combat, he reveals the various ways in which war and race are inextricably intertwined, whether packaged as wars on communism, terrorism, or crime.”—Robin D. G. Kelley, author of Africa Speaks, America Answers: Modern Jazz in Revolutionary Times

"Race and America's Long War is a brilliant and lacerating account of the United States' brutal and racially inflected 'inner and outer wars.' Singh forensically diagnoses the disfigurations the United States has wrought domestically and overseas through its traffic in violence and race, in the context of ever more rapacious and dehumanizing capital accumulation."—Laleh Khalili, author of Time in the Shadows: Confinement in Counterinsurgencies


"This thoughtful intervention will transform contemporary discussion. Singh calls for a complete reassessment of the political significance of struggles against structural racism. Beyond that, he asks a host of urgent, important questions about the fundamental importance of war to U.S. government and policing in their broadest definitions."—Paul Gilroy, author of Darker than Blue: On the Moral Economies of Black Atlantic Culture

"This is an extraordinarily timely publication. Singh’s framework upends traditional distinctions between global and national politics, tracing the ways that conflicts rooted in the ‘domestic’ and ‘foreign’ spheres rely on the same material infrastructure, political logic, and populist appeal. Singh illuminates the continuities in militarized thought and action across place and time: from settler colonial wars for territory and imperial excursions abroad to militarized policing at home."—Daniel Martinez HoSang, author of Racial Propositions: Ballot Initiatives and the Making of Postwar California

"One of our great historians demonstrates his virtuosic ability to skate across huge territories of history with insight and precision.”—Matthew Frye Jacobson, author of Barbarian Virtues: The United States Encounters Foreign Peoples at Home and Abroad, 1876–1917