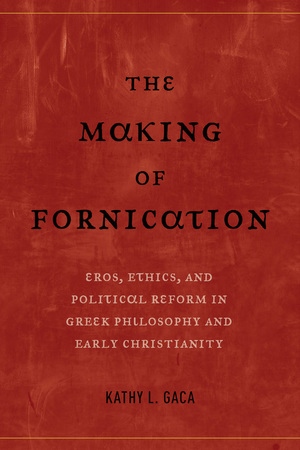 The Making of Fornication Eros, Ethics, and Political Reform in Greek Philosophy and Early Christianity

This provocative work provides a radical reassessment of the emergence and nature of Christian sexual morality, the dominant moral paradigm in Western society since late antiquity. While many scholars, including Michel Foucault, have found the basis of early Christian sexual restrictions in Greek ethics and political philosophy, Kathy L. Gaca demonstrates on compelling new grounds that it is misguided to regard Greek ethics and political theory—with their proposed reforms of eroticism, the family, and civic order—as the foundation of Christian sexual austerity. Rather, in this thoroughly informed and wide-ranging study, Gaca shows that early Christian goals to eradicate fornication were derived from the sexual rules and poetic norms of the Septuagint, or Greek Bible, and that early Christian writers adapted these rules and norms in ways that reveal fascinating insights into the distinctive and largely non-philosophical character of Christian sexual morality.

Writing with an authoritative command of both Greek philosophy and early Christian writings, Gaca investigates Plato, the Stoics, the Pythagoreans, Philo of Alexandria, the apostle Paul, and the patristic Christians Clement of Alexandria, Tatian, and Epiphanes, freshly elucidating their ideas on sexual reform with precision, depth, and originality. Early Christian writers, she demonstrates, transformed all that they borrowed from Greek ethics and political philosophy to launch innovative programs against fornication that were inimical to Greek cultural mores, popular and philosophical alike. The Septuagint's mandate to worship the Lord alone among all gods led to a Christian program to revolutionize Gentile sexual practices, only for early Christians to find this virtually impossible to carry out without going to extremes of sexual renunciation.

Knowledgeable and wide-ranging, this work of intellectual history and ethics cogently demonstrates why early Christian sexual restrictions took such repressive ascetic forms, and casts sobering light on what Christian sexual morality has meant for religious pluralism in Western culture, especially among women as its bearers.

“Gaca’s ability to navigate confidently across both the Greek philosophical tradition and the Septuagint is as rare as it is valuable. An eye-opener.”—Times Literary Supplement

“Learned and well-argued, this book is bound to revolutionize our thinking about an important subject of religious and cultureal history.”—International Review of Biblical Studies

“On almost every page close reading repays the effort.”—Journal of Biblical Literature

“Gaca’s book makes a valuable contribution to the history of sexual ethics in antiquity and will be indispensable reading for all scholars and students interested in that topic.”—Journal of Early Christian Studies

“Rich. . . . Gaca’s detailed analysis of the several traditions, and her incorporation of the Septuagint, NT, and Philo in the argument, mark a significant advance over Foucault’s analysis in The History of Sexuality. Indispensable to future research on the subject and should be in every university library.”—Religious Studies Review

"This is an extensive study of the theorizing about sexual norms and proprieties of certain major Greek philosophical traditions on the one hand (Platonism, Stoicism, Pythagoreanism), and various key figures of the Judeo-Christian tradition on the other (Philo of Alexandria, Paul, Tatian, Clement, Epiphanes), in order to demonstrate what the author terms their 'discontinuity.'… [Gaca] examines the history of these concepts in the Hellenic and the Judeo-Christian traditions more clearly and comprehensively than I have seen it done elsewhere. The book is of considerable importance in understanding the roots of the early Christian attitude to sexuality--something that still has repercussions today."—John Dillon, Trinity College Dublin

"This book is a gold mine of information for anyone interested in the dynamics of sexual morality in Western culture. General readers, students, and scholars will find surprising data about sexual views, theories, practices, and politics in ancient Greek and Roman society, Hellenistic Judaism and philosophy, and early and patristic Christianity. Gaca's dynamic prose is exciting to read. Her detailed footnotes are a virtual encyclopedia of sexual morality in Western culture."—Vernon K. Robbins, Winship Distinguished Research Professor of Religion, Emory University

Part I. Greek Philosophical Sexual Reforms
2. Desire’s Hunger and Plato the Regulator
3. Crafting Eros through the Stoic Logos of Nature
4. The Reproductive Technology of the Pythagoreans

Part II. Greek Biblical Sexual Rules and Their Reworking by Paul and Philo
5. Rival Plans for God’s Sexual Program in the Pentateuch and Paul
6. From the Prophets to Paul: Converting Whore Culture into the Lord’s Veiled Bride
7. Philo’s Reproductive City of God

Part III. Patristic Transformations of the Philosophical, Pauline, and Philonic Rules
8. Driving Aphrodite from the World: Tatian and His Encratite Argument
9. Prophylactic Grace in Clement’s Emergent Church Sexual Ethic
10. The Fornicating Justice of Epiphanes
11. Conclusion: The Demise of Greek Eros and Reproduction