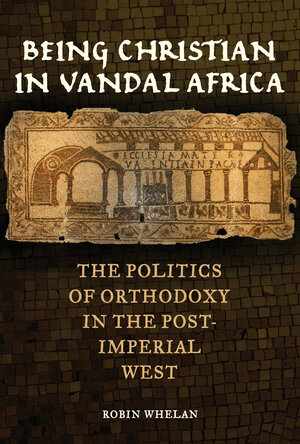 Being Christian in Vandal Africa investigates conflicts over Christian orthodoxy in the Vandal kingdom, the successor to Roman rule in North Africa, ca. 439 to 533 c.e. Exploiting neglected texts, author Robin Whelan exposes a sophisticated culture of disputation between Nicene (“Catholic”) and Homoian (“Arian”) Christians and explores their rival claims to political and religious legitimacy. These contests—sometimes violent—are key to understanding the wider and much-debated issues of identity and state formation in the post-imperial West.

Robin Whelan is  Lecturer in History at the University of Liverpool.

"This is a remarkable first book by a young scholar.... it skillfully analyzes Christian texts from Vandal North Africa that have not received enough attention but which, as Whelan masterly shows, nevertheless constitute a significant contribution to the understanding of the period.—Bryn Mawr Classical Review

With nuanced argument, methodological sophistication, and sensible judgment, Being Christian in Vandal Africa provides a welcome corrective to the polemical rhetoric of the sources that have unduly shaped the judgments of scholarship. Robin Whelan is to be commended for producing an exemplary study that will appeal to a variety of readers including scholars of the Vandal Kingdom, the post-imperial West, and late antiquity more generally.—Reading Religion

"Being Christian in Vandal North Africa offers a fresh view of the vital, and sometimes violent, competition between rival Christian groups in the Vandal kingdom that dismantles long-held presumptions about the relationship between the Vandal court and its Christian subjects, both Nicene and Homoian. In doing so it contributes in important ways to the rewriting of the history of Vandal North Africa. Whelan argues convincingly that being Christian in this period was clearly not as straightforward as we have been led to believe."—Journal of Ecclesiastical History

"Well-written, well-organized, and well-argued, this book is a necessary read for anyone interested in the transition from Roman late antiquity to the successor states of the early medieval period."—Augustiniana

"Whelan’s work is consistently of high quality and a welcome addition to the literature."—Journal of Church and State

"This book is well-written, well-argued, and an important contribution—it is not an exaggeration to say that it immediately becomes one of the most important books available on Christianity on Vandal Africa."—Journal of the Conference on Faith and History

"Highly recommended for anyone interested in problems evolving from the intersection of religious contests and post-imperial politics."—Early Medieval Europe

"Whelan’s deft handling of episcopal rhetoric is one of many strengths in this well-written and persuasive book. . . . The implications of
Whelan’s observations are enormous."—Journal of Orthodox Christian Studies,

"Whelan provides an exhaustive and convincing analysis of doctrinal conflicts under Vandal rule in Roman Africa, contributing greatly to our understanding of the post-Roman West. . . .With great elegance and methodological acuity, Whelan succeeded in writing a study that provides a more nuanced picture of the societies in question."

“Whelan’s writing is a joy to read. Being Christian in Vandal Africa makes a genuine and substantial contribution to a field of study that has seen a great deal of exciting activity in recent years. Whelan complements a firm mastery of existing secondary scholarship with deft and sensitive readings of previously understudied primary materials. This is a tremendous book.”—Andy Merrills, Associate Professor of Ancient History, University of Leicester

”This splendid book is, quite simply, the finest discussion of religion in the Vandal kingdom that I have read. The analysis presented here challenges us to rethink religious controversy not just in Africa but across the post-Roman West.”—Jonathan P. Conant, Associate Professor of History, Brown University

"This is a remarkable first book by a young scholar. . . . it skillfully analyzes Christian texts from Vandal North Africa that have not received enough attention but which, as Whelan masterly shows, nevertheless constitute a significant contribution to the understanding of the period. . . . I highly recommend his book to anyone working on early Christianity."—Bryn Mawr Classical Review

PART I. CONTESTING ORTHODOXY
1. African Churches
2. In Dialogue with Heresy: Christian Polemical Literature
3. “What Th ey Are to Us, We Are to Them”: Homoian Orthodoxy and Homoousian Heresy
4. Ecclesiastical Histories: Reinventing the Arians