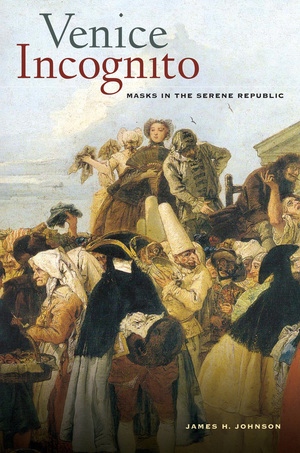 "The entire town is disguised," declared a French tourist of eighteenth-century Venice. And, indeed, maskers of all ranks—nobles, clergy, imposters, seducers, con men—could be found mixing at every level of Venetian society. Even a pious nun donned a mask and male attire for her liaison with the libertine Casanova. In Venice Incognito, James H. Johnson offers a spirited analysis of masking in this carnival-loving city. He draws on a wealth of material to explore the world view of maskers, both during and outside of carnival, and reconstructs their logic: covering the face in public was a uniquely Venetian response to one of the most rigid class hierarchies in European history. This vivid account goes beyond common views that masking was about forgetting the past and minding the muse of pleasure to offer fresh insight into the historical construction of identity.

By James H. Johnson, author of Venice Incognito: Masks in the Serene Republic “Man is least himself when he speaks in his own person. Give him a mask and he will tell …

James H. Johnson is Professor of History at Boston University and the author of the award-winning book, Listening in Paris (UC Press).

“Comprehensively researched, insightful reconsideration of the function of masks and masking. . . . Highly recommended.”—Choice

"Fascinating and richly developed. Venice Incognito is a contribution both to urban studies and to the carnivalesque."—Natalie Zemon Davis, University of Toronto

“Venice Incognito is a brilliant reassessment of Venetian carnival and the peculiar phenomenon of masking in early modern Venice. Johnson's wide-ranging, insightful, and imaginative scholarship is matched by his fluid and accessible writing style. This book is that all-too-rare commodity: a scholarly page-turner.”

“This is a beautiful book about a strange subject: the custom among Venetian aristocrats of wearing masks in public. One of the most original works in early modern scholarship I have read in a long time, Venice Incognito will have a permanent place on most early modern historians’ shelves and will be essential reading for performance studies and theater history.”


—Edward Muir, author of The Culture Wars of the Late Renaissance

“In this fascinating book, the author cleverly balances the traditional concept of masking as an anti-authoritarian culture of dissembling with the idea of the 'honest mask,' which defends rank and the established order, and produces an excellent, nuanced, and well-written account of the carnivalesque in eighteenth-century Venice.”

“In this intriguing and thoroughly researched book, James Johnson takes the reader through the crowded calli, campi, and canals of Venice in search of the varied meanings of the mask in the history and culture of that city on the water. From masking’s first recorded appearance in the thirteenth century to its ubiquity in the carnival decline of eighteenth-century Venice, from the dissimulations of Giacomo Casanova to Arlecchino and the commedia dell’arte stage, from the social anonymity of the gambling halls to the socially charged debate over Goldoni’s radical unmasking of the actor, Venice Incognito traces the shifting functions of the mask and its implications. Just as importantly, the book challenges much conventional wisdom about masking and carnival itself.”