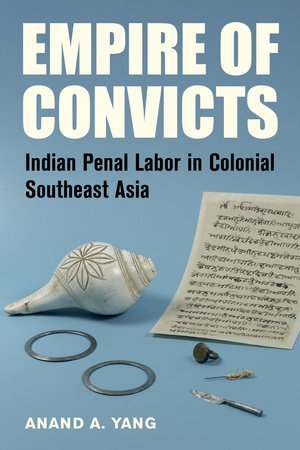 Empire of Convicts focuses on male and female Indians incarcerated in Southeast Asia for criminal and political offenses committed in colonial South Asia. From the seventeenth century onward, penal transportation was a key strategy of British imperial rule, exemplified by deportations first to the Americas and later to Australia. Case studies from the insular prisons of Bengkulu, Penang, and Singapore illuminate another carceral regime in the Indian Ocean World that brought South Asia and Southeast Asia together through a global system of forced migration and coerced labor. A major contribution to histories of crime and punishment, prisons, law, labor, transportation, migration, colonialism, and the Indian Ocean World, Empire of Convicts narrates the experiences of Indian bandwars (convicts) and shows how they exercised agency in difficult situations, fashioning their own worlds and even becoming “their own warders.” Anand A. Yang brings long journeys across kala pani (black waters) to life in a deeply researched and engrossing account that moves fluidly between local and global contexts.

Anand A. Yang is the Walker Family Endowed Professor in History at the University of Washington and the author of The Limited Raj and Bazaar India.