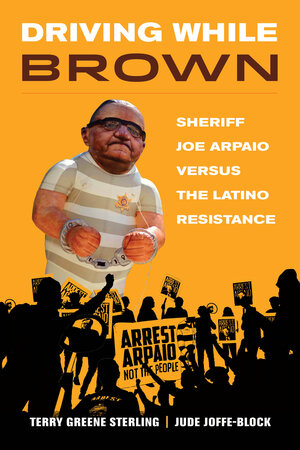 Journalists Terry Greene Sterling and Jude Joffe-Block spent years chronicling the human consequences of Sheriff Joe Arpaio’s relentless immigration enforcement in Maricopa County, Arizona. In Driving While Brown, they tell the tale of two opposing movements that redefined Arizona’s political landscape—the restrictionist cause embraced by Arpaio and the Latino-led resistance that rose up against it.

Jude Joffe-Block joined The Associated Press as a reporter and editor in 2020. Before that, she reported on immigration for more than a decade for outlets that include NPR, the Guardian, The World and Arizona Center for Investigative Reporting. She was a visiting journalist at the Russell Sage Foundation and a fellow with New America, the Center for the Future of Arizona, and the Logan Nonfiction Program while coauthoring this book. She began her journalism career in Mexico.

“A work of exemplary reporting.”—Kirkus Reviews

“An ‘I-can’t-put-it-down’ book. Even as one who has followed the career of Arpaio for over 25 years, I found it fascinating to learn in detail of the grass-roots movement that arose in opposition to his policies. . . . The authors don’t just relate events, they tell the stories of some of the most noteworthy players in this drama. We get a sense of their humanity, their conflicts, and their struggles. This makes the book not only a definitive treatment of the Arpaio phenomenon, but also a highly readable, gripping story.”—KTAR/Think Tank with Mike ONeil

"Arpaio is, if it’s possible, even Trumpier than Trump. This splendid book is a lively portrait of a demagogic anti-immigration crusader and the people who helped bring him down. But the authors have nonetheless let Arpaio’s own voice be heard, and have listened carefully to people on both sides of the immigration debate that seems certain to rage for decades to come."—Adam Hochschild, author of Lessons from a Dark Time and Other Essays