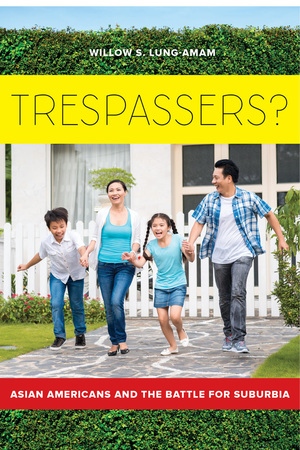 Trespassers? Asian Americans and the Battle for Suburbia

Beyond the gilded gates of Google, little has been written about the suburban communities of Silicon Valley. Over the past several decades, the region’s booming tech economy spurred rapid population growth, increased racial diversity, and prompted an influx of immigration, especially among highly skilled and educated migrants from China, Taiwan, and India. At the same time, the response to these newcomers among long-time neighbors and city officials revealed complex attitudes in even the most well-heeled and diverse communities.

Trespassers? takes an intimate look at the everyday life and politics inside Silicon Valley against a backdrop of these dramatic demographic shifts. At the broadest level, it raises questions about the rights of diverse populations to their own piece of the suburban American Dream. It follows one community over several decades as it transforms from a sleepy rural town to a global gateway and one of the nation's largest Asian American–majority cities. There, it highlights the passionate efforts of Asian Americans to make Silicon Valley their home by investing in local schools, neighborhoods, and shopping centers. It also provides a textured tale of the tensions that emerge over this suburb's changing environment. With vivid storytelling, Trespassers? uncovers suburbia as an increasingly important place for immigrants and minorities to register their claims for equality and inclusion.

This guest post is published around the 2018 Association for Asian American Studies Conference, occurring in San Francisco from March 29-31. #AAAS2018  #ACJS2018 #ACJS18 By Willow Lung-Amam, author of Trespassers?: Asian Americans and …

Willow S. Lung-Amam is Assistant Professor in the Urban Studies and Planning Program at the University of Maryland, College Park. Her scholarship focuses on the link between social inequality and the built environment.

"A timely primer for scholars and students as well as practitioners concerned with race and metropolitan development. Summing Up: Highly recommended."—CHOICE

“Well-researched and well-written.”—Journal of Urban Affairs

"Trespassers is an important contribution to scholars interested in how histories of suburban spatial distinction and social hierarchies operate into the present, as well as new forms of political and civic engagement by minority communities. Refreshingly, non-specialists, community activists, and policy makers also will find Lung-Amam’s prose accessible and informative."—City & Society

"To a certain extent, Asian Americans and Silicon Valley have become synonymous in recent decades. But most existing work discusses Asian American entrepreneurs or low-skill laborers, high-tech industries, and the glass ceiling faced by Asian American employees. Lung-Amam's book, therefore, provides a fresh and insightful perspective: how Asian Americans have transformed daily lives and neighborhoods, including demographic changes, education preferences and practices, shopping malls, and dwelling styles. This is good reading for anyone interested in Silicon Valley, suburban knowledge-based economic centers, and in general how American suburbs are changing as a result of economic restructuring and immigration." —Wei Li, Professor, Arizona State University, and Fulbright-Nehru Senior Scholar, Jawajarlal Nehru University


"Willow Lung-Amam's analysis is particularly new and insightful and will likely spark a lot of discussion and debate."—Wendy Cheng, Assistant Professor of American Studies, Scripps College

Willow Lung-Amam’s ethnographic case study of Asian Americans pursuing the American Dream on often inhospitable grounds in Fremont in Silicon Valley reveals racial and economic change. She competently and extensively discusses the splintered social order on the frontlines of debate over Asian Americans’ new claims to their rights as suburbanites. Trespassers? Asian Americans and the Battle for Suburbia is vital reading for those interested in spaces of intersection of different Asian American groups residing in the rapidly changing suburban landscape in Silicon Valley in particular and those interested in suburban spatial justice in general.—Katrin B. Anacker, editor of The New American Suburb: Poverty, Race, and the Economic Crisis

"With rich evidence and sharp prose, Willow Lung-Amam illuminates Asian Americans' contested efforts to make places, meanings, and identities in the global landscapes of California's Silicon Valley. This book is essential reading on the landscape of twenty-first-century America."—Andrew Wiese, Professor of History, San Diego State University, and author of Places of Their Own: African American Suburbanization in the Twentieth Century

1 • The New Gold Mountain
2 • A Quality Education for Whom?
3 • Mainstreaming the Asian Mall
4 • That “Monster House” Is My Home
5 • Charting New Suburban Storylines
Afterword: Keeping the Dream Alive in Troubled Times