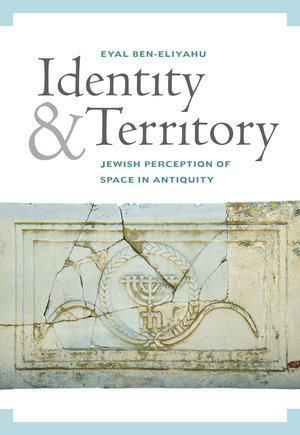 Identity and Territory Jewish Perceptions of Space in Antiquity

Throughout history, the relationship between Jews and their land has been a vibrant, much-debated topic within the Jewish world and in international political discourse. Identity and Territory explores how ancient conceptions of Israel—of both the land itself and its shifting frontiers and borders—have played a decisive role in forming national and religious identities across the millennia. Through the works of Second Temple period Jews and rabbinic literature, Eyal Ben-Eliyahu examines the role of territorial status, boundaries, mental maps, and holy sites, drawing comparisons to popular Jewish and Christian perceptions of space. Showing how space defines nationhood and how Jewish identity influences perceptions of space, Ben-Eliyahu uncovers varied understandings of the land that resonate with contemporary views of the relationship between territory and ideology.

Eyal Ben-Eliyahu is Professor of Jewish History at the University of Haifa. He is the author of Handbook of Jewish Literature from Late Antiquity and Between Borders: The Boundaries of Eretz-Israel in the Consciousness of the Jewish People.

"In this erudite monograph Ben Eliyahu surveys various texts—ranging chronologically from the second temple period through early rabbinic and early Christian writings—in order to analyze, compare, and contrast how the land of Israel and areas in it (like the territory of Judah or its capital Jerusalem) were imagined. Recommended."—CHOICE

"This book is highly recommended for its thorough research, the original application of the spatial theory of history to Jewish studies, its extensive notes and bibliography, and the large number of ancient Jewish and other texts that are covered."—H-Net Reviews

"This book offers a judicious and exhaustive reading into the fluctuating perceptions of the territorial space known by multiple names to various communities. It successfully elucidates the importance of the geographical approach to the very ancient history of communities living in the land that today is known as Israel and Palestine. . . . this is a valuable, critical contribution to the discussion on Jewish conceptions of space. Its approachable language enables a wider public, unfamiliar with the formidable corpus the book tackles, to take part in the conversation."—Journal of Historical Geography

“Eyal Ben-Eliyahu has produced a sophisticated treatment of Jewish conceptions of the boundaries of the land of Israel and its internal geography, from the Hebrew Bible to the end of antiquity. This book deftly demonstrates how the Jewish discourse of space was shaped—and reshaped—at the dynamic intersection of communal memory, scriptural exegesis, demographic change, and the shifting structures of empire.”—Ra‘anan Boustan, Research Scholar in the Program in Judaic Studies, Princeton University


“This novel, original, and comprehensive work is a pioneering, long-awaited attempt to apply the spatial theory of history, prominent in the humanities and social sciences, to Jewish studies. Through scholarly erudition and shrewd analysis, this book brilliantly illuminates the reciprocal relations between territory and identity in post-biblical Jewish society.”—Vered Noam, Professor of Talmud and Second Temple Literature, Tel Aviv University
Read More >

1. From Judah to Israel: Territory and Identity
2. Borders, Space, and Identity in Second Temple Literature
3. From Earthly Land to Holy Land
4. Land of the Sages
5. Rabbinic Literature Confronts Nonrabbinic Jewish
Culture and Christianity: The Question of Holy Spaces