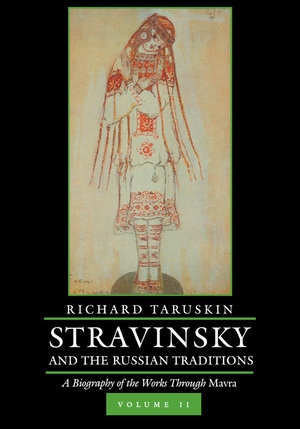 Stravinsky and the Russian Traditions, Volume Two A Biography of the Works through Mavra

This book undoes 50 years of mythmaking about Stravinsky's life in music.

During his spectacular career, Igor Stravinsky underplayed his Russian past in favor of a European cosmopolitanism. Richard Taruskin has refused to take the composer at his word. In this long-awaited study, he defines Stravinsky's relationship to the musical and artistic traditions of his native land and gives us a dramatically new picture of one of the major figures in the history of music.

Taruskin draws directly on newly accessible archives and on a wealth of Russian documents. In Volume One, he sets the historical scene: the St. Petersburg musical press, the arts journals, and the writings of anthropologists, folklorists, philosophers, and poets. Volume Two addresses the masterpieces of Stravinsky's early maturity—Petrushka, The Rite of Spring, and Les Noces. Taruskin investigates the composer's collaborations with Diaghilev to illuminate the relationship between folklore and modernity. He elucidates the Silver Age ideal of "neonationalism"—the professional appropriation of motifs and style characteristics from folk art—and how Stravinsky realized this ideal in his music.

Taruskin demonstrates how Stravinsky achieved his modernist technique by combining what was most characteristically Russian in his musical training with stylistic elements abstracted from Russian folklore. The stylistic synthesis thus achieved formed Stravinsky as a composer for life, whatever the aesthetic allegiances he later professed.


Written with Taruskin's characteristic mixture of in-depth research and stylistic verve, this book will be mandatory reading for all those seriously interested in the life and work of Stravinsky.

"Taruskin's vast and detailed knowledge of Russian culture, music, and traditions provides an unparalleled background for this monumental study. . . . Taruskin lets us see Stravinsky in a global context, as we would a continent from the space shuttle—but he also gives us a microscopic view of details that is nothing less than Proustian in its nuances and shadings. . . . A simply incredible achievement!"—George Perle, author of The Listening Composer

"What Fernand Braudel did for the Mediterranean, Richard Taruskin has done for Stravinsky's Russian Period."—David Schiff, author of The Music of Elliott Carter

"This book will arouse great interest and attention, and also, to be sure, heated debate; but whatever one's reaction, no one will be able to ignore it. . . . I suspect it will, with a single blow (the word has been chosen carefully), establish Taruskin as the foremost scholar of twentieth-century music in the world."—Robert P. Morgan, author of Twentieth-Century Music

"To my knowledge, no previous book has situated music—music subtly described and understood—within such a richly embroidered fabric of cultural and intellectual history. A landmark study, at once engaging, necessary, and compelling."—Joseph Horowitz, author of Wagner Nights: An American History 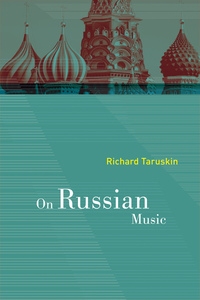