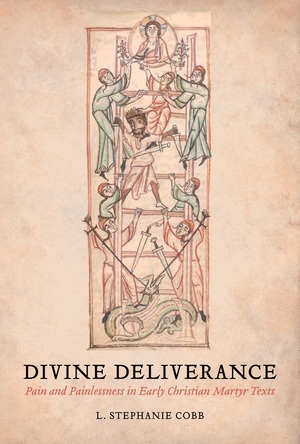 Does martyrdom hurt? The obvious answer to this question is “yes.” L. Stephanie Cobb, asserts, however, that early Christian martyr texts respond to this question with an emphatic “no!” Divine Deliverance examines the original martyr texts of the second through fifth centuries, concluding that these narratives in fact seek to demonstrate the Christian martyrs’ imperviousness to pain. For these martyrs, God was present with, and within, the martyrs, delivering them from pain. These martyrs’ claims not to feel pain define and redefine Christianity in the ancient world: whereas Christians did not deny the reality of their subjection to state violence, they argued that they were not ultimately vulnerable to its painful effects.

L. Stephanie Cobb is the George and Sallie Cutchin Camp Professor of Bible in the Department of Religious Studies at the University of Richmond. She is also author of Dying to Be Men: Gender and Language in Early Christian Martyr Texts.

"This excellent book will encourage a re-evaluation of early Christian martyr texts so that more attention is paid to the theological, christological, and eschatological commitments contained therein."—Journal of Early Christian Studies

"... an impressive piece of work. It is well-written, well-structured, and well-argued. It is a must-read for any scholar interested in the beginnings of Christianity and martyrdom, ancient and current."—Reading Religion

“Are ancient Christian martyr texts sadistic? Masochistic? Why carefully catalogue a victim’s excruciating death if not to valorize pain? In Divine Deliverance, L. Stephanie Cobb explores depictions of martyrs as oblivious to the pain inflicted on them by torture. Her delightfully accessible discussions of data from a wide subset of Greek and Latin texts expose the variously successful narrative techniques employed to describe torture and the ways in which these techniques effect a shift from a credible (history) to an incredible (theology) generic horizon. The purpose of such a shift was to not to collapse but to broaden the interpretive distance between martyrs and the mundane world, allowing audiences to marvel at painless torture as divine analgesia imparted by Christ in staged usurpations of Roman state power. Highly recommended!”—Clare K. Rothschild, Lewis University


“In this careful and convincing reading of early Christian martyr texts, Cobb skillfully argues against the prevailing view that Christian identity is not to be found primarily in the embrace of suffering and valorization of pain. Instead, in graphic descriptions of torture, the martyrs’ insensibility to pain rather than their resistance to it invites a far more theological interpretation of these texts than is generally found, not least the central, but hitherto overlooked, presence of God. Cobb’s rejection of pain as a locus of interpretative significance challenges the mainstream reading of early Christian martyrdom. Therefore, Divine Deliverance is a significant and dramatic intervention in the study of early Christianity.”— Paul Middleton, University of Chester

“With this absorbing analysis of martyrdom literature, Cobb challenges us to see how the facet of ‘painlessness’ creates a vision of religious identity beyond mere symbols of faith. Provocative and precise, this study is well argued, clearly written, and conceptually sound! I recommend it to all students of early Christian literature.”—Clayton N. Jefford, Saint Meinrad Seminary and School of Theology 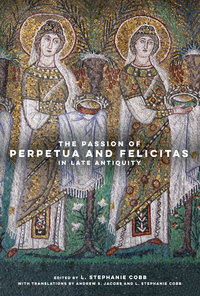 The Passion of Perpetua and Felicitas in Late Antiquity