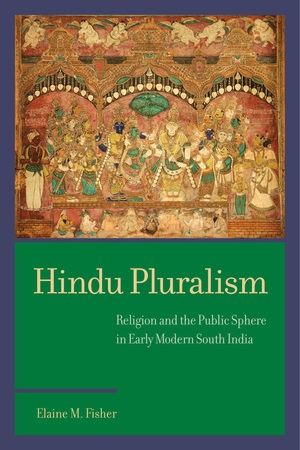 In Hindu Pluralism, Elaine M. Fisher complicates the traditional scholarly narrative of the unification of Hinduism. By calling into question the colonial categories implicit in the term “sectarianism,” Fisher’s work excavates the pluralistic textures of precolonial Hinduism in the centuries prior to British intervention. Drawing on previously unpublished sources in Sanskrit, Tamil, and Telugu, Fisher argues that the performance of plural religious identities in public space in Indian early modernity paved the way for the emergence of a distinctively non-Western form of religious pluralism. This work provides a critical resource for understanding how Hinduism developed in the early modern period, a crucial era that set the tenor for religion's role in public life in India through the present day.

Elaine M. Fisher is a Fulbright-Nehru Postdoctoral Fellow at the University of Mysore. Starting in the fall of 2017 she will be Assistant Professor in the Department of Religious Studies at Stanford University.

"A clearly written and outstanding study of early modern India. Fisher’s exploration of the relationship between the political and the religious is informative and stimulating. "—Reading Religion

"This work provides a detailed, insightful, and original perspective on a significant and understudied period. It engages intelligently with current discussions of early modern Indian intellectual and religious history, while calling into question key elements of the existing picture of the period among specialists in the field."—Lawrence McCrea, Professor of Sanskrit Studies, Cornell University

"Fisher works at both a micro and macro level to read the intricacies of Smarta Saivism against the broader backdrop of evolving definitions of Hinduism. Her counterintuitive thesis is that sectarianism is not so much a breakup of a preexisting unity but rather an aggregation of discrete religions."—Gauri Viswanathan, Class of 1933 Professor in the Humanities, Columbia University, author of Outside the Fold: Conversion, Modernity, and Belief

"Fisher has excellent historical and philological skills that have enabled her to contribute a very important piece of scholarship that bears directly on the formation of the complex set of social, political, and religious beliefs and practices that constitute modern Hinduism. Her work is critical now more than ever in helping us to understand what Hinduism is and how it began to be that way, not in misty antiquity but in early modernity."—Robert P. Goldman, Catherine and William L. Magistretti Distinguished Professor of Sanskrit and India Studies, University of California at Berkeley