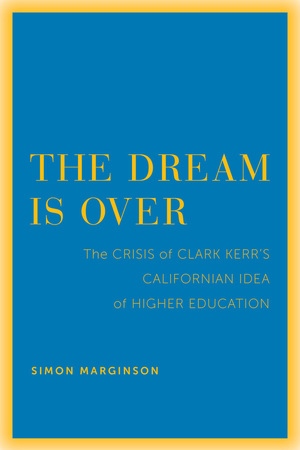 The Dream Is Over tells the extraordinary story of the 1960 Master Plan for Higher Education in California, created by visionary University of California President Clark Kerr and his contemporaries. The Master Plan’s equality of opportunity policy brought college within reach of millions of American families for the first time and fashioned the world’s leading system of public research universities. The California idea became the leading model for higher education across the world and has had great influence in the rapid growth of universities in China and East Asia. Yet, remarkably, the political conditions supporting the California idea in California itself have evaporated. Universal access is faltering, public tuition is rising, the great research universities face new challenges, and educational participation in California, once the national leader, lags far behind. Can the social values embodied in Kerr’s vision be renewed?

"This is a remarkable contribution to the debate about the modern university and its place insociety."—Higher Education

“The Dream Is Over is an outstanding contribution to the literature on higher education. It should be read not only by a large American audience of scholars, teachers, students, and policy makers, but also by a wider international audience interested in higher education, its successes, its shortcomings, and the policies that have driven both.”—Judith C. Brown, Dean of the College of Arts and Humanities, Minerva, and former Vice President for Academic Affairs and Provost at Wesleyan University

"The Dream is Over is a tour de force by Simon Marginson, whose scholarship is essential for understanding the role of higher education in society today. Through an archeology of the “Californan idea,” Marginson analyzes the intellectual and political work that established the Master Plan and the University of California as the city of intellect. He shows how the California model influenced the design of higher education around the world and identifies the forces that have brought it to the brink of ruin. Marginson convincingly argues that higher education in the United States now contributes to the reproduction of social inequality but also provides practical suggestions for how to re-charter the pact between higher education and society.“—Dr. Brendan Cantwell, Michigan State University and Coordinating Editor of Higher Education


"Clark Kerr's influential vision for a public, meritocratic and high quality state university system for California has exercised enormous influence not only in the United States but throughout the world. This important book captures a remarkable irony in the success of kerr's 'California idea' of higher education: while the idea continues its powerful effect internationally, the concept is losing its traction at home. The Dream is Over benefits from its author's strong historical grounding and international perspective. It offers contemporary scholarship that speaks directly to central concerns of university leaders and policy-makers. Professor Marginson, once again, offers a valuable contribution to the international higher education conversation." —Glyn Davis, Vice-Chancellor and Principal, University of Melbourne.

"The Dream is Over is a powerful work of scholarship and synthesis. It tracks historical shifts in American politics, society, and economy; the rise of global science; and the worldwide effects of global university rankings. It has wide implications for policymakers, within and beyond the U.S." —Dr. Geoff Sharrock, Program Director at the LH Martin Institute.
Read More >

PART TWO. CROSSING THE WATERS: THE CALIFORNIA IDEA IN THE WORLD
8. The Idea Spreads
9. Participation without Limit
10. The Spread of Science
11. The Global Multiversity
12. Systems and Stratification
13. American Universities in the Global Space
14. Enter the Dragon 96 15. Higher Education in China and the United States