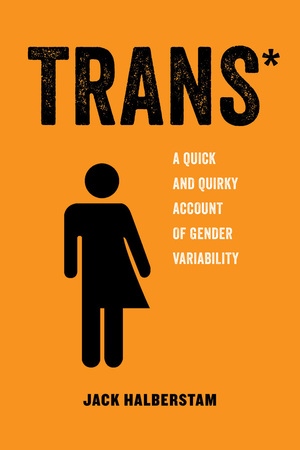 Trans A Quick and Quirky Account of Gender Variability

Midterm elections are underway. And as we await the results of who will control Congress, we take a look back at how we arrived at this current political moment and how it …

With just 15 days before the midterm elections, these books will help you sharpen your understanding of our current political moment.   How to Read a Protest: The Art of Organizing and …

Jack Halberstam is Professor of English and Gender Studies at Columbia University.

“Wide-ranging in its explorations, this slim volume aims to provide some wisdom at a pivotal moment in trans history. . . . There is much to recommend this text, including its introductory review of some recent trans scholarship and its gloss of contemporary challenges facing the trans community.”—Hypatia

"More than just an account of gender variability, this book provides suggestions for reframing our perceptions of the gendered body and opens up tantalizing possibilities for the future. This is an essential purchase for all libraries serving gender studies programs at all levels."—Resources for Gender and Women's Studies: A Feminist Review

"This is no inaccessible tome full of prose and obfuscating jargon; it is friendly and approaches a broad range of subjects, making it a good 'gateway book' for the field of transgender studies."—QED: A Journal in GLBTQ Worldmaking

“This lively and smart book by Jack Halberstam offers a new way of approaching the politics of ‘naming, claiming, speech, silence, and protest’ through an analysis of grammar, language use, social media, stories, poetry, theory, and film that foreground the multiple meanings of the trans* body. This is the treatise on the asterisks for which we have been waiting, blending academic and popular discourse in that Halberstam way. This book offers an incisive way of understanding trans* in relation to inventive world-making, the promises and dangers of state recognition and new forms of tolerance, and the imperative to keep our lenses wide enough to embrace a field of multiplicity. Halberstam navigates the tensions between trans* theory and feminism, its relation to inter-generational misprision, and the pervasive problem of white presumption that effaces the different histories, life narratives, and orientations to space, time, and the legacies of violence that vector through trans*. Some may worry that trans* does not give space enough to trans without the asterisks, but Halberstam seeks to broaden the category in the direction of inclusiveness, insisting that we understand the different modalities of violence as well as aesthetic forms of invention the belong to trans*. The book cracks open a future, resisting transphobia and ushering in a new horizon for anybody struggling with the norms they oppose and the forms of life they desire and deserve to live.”—Judith Butler, author of Gender Trouble: Feminism and the Subversion of Identity


“If Trans* were simply a compressed, learned primer about gender variability for audiences of all kinds, it would be important enough. But Jack Halberstam here offers us something more—a supremely lucid explication of highly complex and controversial ideas, cultural artifacts, and histories that never dumbs down nor gets lost in the weeds. I particularly appreciate its ranginess, perspective, sense of humor, autobiographical anecdotes, and critical dedication to ‘putting pressure on all modes of gendered embodiment.’”—Maggie Nelson, author of The Argonauts

“Jack Halberstam drills down to the culture’s defining characteristics of the gendered body and proceeds to unravel the interconnected nature of the gendered mind. And just when you think you’ve reached the climax of your theorygasm, dear Jack opens his heart and tells all—and in so doing he reveals the naked, beautiful soul of trans*.”—Kate Bornstein, author of Gender Outlaw: On Men, Women, and the Rest of Us