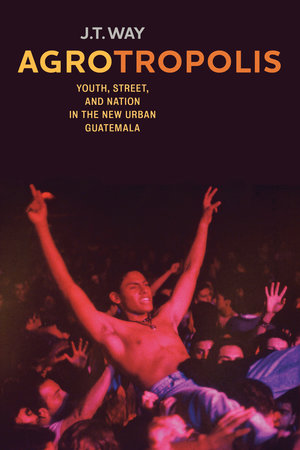 Agrotropolis Youth, Street, and Nation in the New Urban Guatemala

In Agrotropolis, historian J. T. Way traces the developments of Guatemalan urbanization and youth culture since 1983. In case studies that bring together political economy, popular music, and everyday life, Way explores the rise of urban space in towns seen as quintessentially "rural" and showcases grassroots cultural assertiveness. In a post-revolutionary era, young people coming of age on the globally inflected city street used popular culture as one means of creating a new national imaginary that rejects Guatemala's racially coded system of castes. Drawing on local sources, deep ethnographies, and the digital archive, Agrotropolis places working-class Maya and mestizo hometowns and creativity at the center of planetary urban history.

By J. T. Way, author of Agrotropolis: Youth, Street, and Nation in the New Urban Guatemala As a scholar whose research applies directly as testimony in asylum cases, I am well-versed in …

J. T. Way is Associate Professor of History at Georgia State University and author of The Mayan in the Mall: Globalization, Development, and the Making of Modern Guatemala. He lived in Guatemala for ten years and has extensively studied the country’s popular class.

"Agrotropolis is a remarkably authentic work of history that deserves serious attention especially at a time when thousands of Guatemalans continue to flee for their lives from a country where hope for social justice has dimmed."—The Latin Americanist

"In this remarkable study of globalized youth cultures in post–civil war Guatemala, urban historian and ethnographer J.T. Way presents a new spatial framework through which to decipher subaltern lifeworlds, identities, and imaginaries in a historically 'rural' regional landscape. Agrotropolis maps this terrain from the bottom up, through the popular music and cultural assertions of multiethnic, working-class Guatemalan youth. This is a path-breaking account of agro-urbanization and its contested, rapidly mutating cultural geographies that will be of central interest to scholars and students not only of Central America, but of emergent urban spaces around the world." ––Neil Brenner, Lucy Flower Professor of Urban Sociology, University of Chicago, and Founder and Director of the Urban Theory Lab

"This is a brilliantly intellectual and deeply felt history of the now. Through their art, music, literature, and political analyses, Way brings to life the smart creative kids who tried to make revolution in Guatemala in the 1970s and those bequeathed the aftershocks of genocide and neoliberal poverty who are nonetheless also makers and dreamers, complex humans irreducible to stereotypes of victims, migrants, or monstrous gangbangers. He boldly conjures agrarian worlds not destined for the dustbins of history, but instead, vibrant cores of emerging cosmopolitanism—Agrotropolis. Without minimizing the terrible costs of genocide, Way makes the compelling argument that the post-peace generation includes a new kind of ethnic person who has created a distinct form of national identification radically different from the servility-inducing caste-based social organization that led to the war."––Diane M. Nelson, author of Who Counts? The Mathematics of Death and Life after Genocide

Unusually original in content, method, passion, and perspective, Agrotropolis is the only book I have read that really brings together specific generational cultural forms, people, and historical moments in a manner that is moving and up close. Way's analysis of changing identities is on the mark, and his presentation of the concept and reality of 'agrotropolis' creates a great lens through which to untangle what otherwise seems an unfathomable muddle of city/town/village/cornfield."––Deborah T. Levenson, author of Adiós Niño: The Gangs of Guatemala City and the Politics of Death