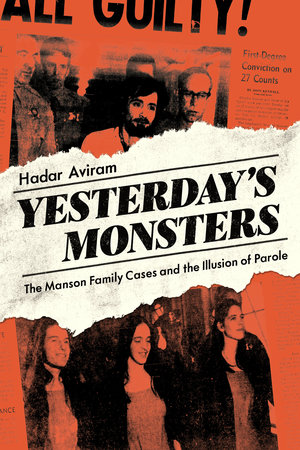 Yesterday's Monsters The Manson Family Cases and the Illusion of Parole

Hadar Aviram is Thomas Miller Professor of Law at the University of California Hastings College of the Law. She is the author of Cheap on Crime: Recession-Era Politics and the Transformation of American Punishment and a coeditor of The Legal Process and the Promise of Justice. She is a frequent media commentator and runs the California Correctional Crisis blog.

“An underappreciated contributor to mass incarceration has been the politicizing of the parole process, particularly for violent offenses. Through an insightful analysis of the Manson Family experience, Hadar Aviram illuminates how these high-profile cases helped institutionalize a system of extreme, often counterproductive, punishments that have transformed our conception of parole.”—Marc Mauer, executive director of the Sentencing Project

“Filling an enormous vacuum in the literature, Aviram draws on fifty years of transcripts showcasing the Board of Parole Hearings’ interviews of the Manson Family members. Her book lucidly conveys how the magnitude of their crimes functioned as a crucial catalyst for statutory changes that measurably harshened criminal penalties while narrowing the prospects for parole release in the ensuing decades.”—Edward E. Rhine, Robina Institute of Criminal Law and Criminal Justice, University of Minnesota Law School

“Yesterday’s Monsters is three remarkable books at once: a compelling work of late twentieth-century social history, a sober and scholarly analysis of the flaws in our parole system, and an enlightened program for sensible reform.”—Robert Weisberg, Professor of Law, Stanford University

3 • The Triumph of Helter Skelter: How the Manson Family
Cases Came to Represent the Sui Generis Ultimate Evil

4 • Revisiting the Past: From Facts to Emotion in
Understanding the Crime of Commitment

5 • Reinventing the Present: Crafting and Interpreting
the Inmate’s Prison Experience

6 • Reimagining the Future: The Past Casts Its Shadow on
the Inmate’s Postrelease Plans