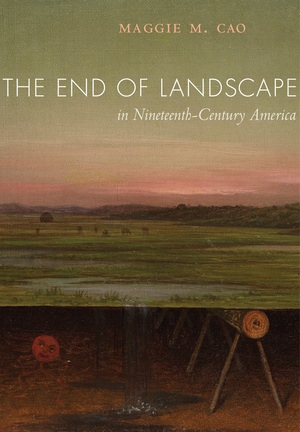 The End of Landscape in Nineteenth-Century America

The End of Landscape in Nineteenth-Century America examines the dissolution of landscape painting in the late nineteenth-century United States. Maggie M. Cao explores the pictorial practices that challenged, mourned, or revised the conventions of landscape painting, a major cultural project for nineteenth-century Americans. Through rich analysis of artworks at the genre’s unsettling limits—landscapes that self-destruct, masquerade as currency, or even take flight—Cao shows that experiments in landscape played a crucial role in the American encounter with modernity. Landscape is the genre through which American art most urgently sought to come to terms with the modern world.

"The case Cao makes is too complicated to reproduce here; one detail will have to suffice: the decorative butterfly unexpectedly echoes the apparition of the steamboat Ancon as it lists off the shores of Alaska, reminding the artist of his own artistic dead end. Imaginative leaps such as this abound in this brilliant book; Cao makes them with breathtaking historical sophistication."—Journal of American History

"It must be said that [Cao's] arguments are frequently highly creative and imaginative."—Winterthur Portfolio

"The End of Landscape in Nineteenth-Century America engages the precarious status of landscape art in the period that witnessed the closing of the frontier, the transition to finance capital, and a crisis of both subject and representational means. At once deeply grounded in the material, cultural, and discursive conditions of painting in the later nineteenth century, Cao’s important book—by explaining the eccentric logic of landscape’s endgames—also refigures our understanding of its beginnings and its futures. Lucidly analyzing the varied responses of landscape artists to the ever more immaterial conditions of modernization, and to the loss of a firm ‘ground’ for their genre, Cao’s book adds to our expanding understanding of the space-time matrix—the physical, social, and historical transits—within which works of art live."—Angela Miller, Professor of Art History, Washington University in St. Louis


"A brilliant and timely reinterpretation of painters wrestling with the economic and environmental conditions of modernity. Cao draws our gaze away from the canon of American landscape to focus on experimental works that betrayed the limits and inadequacies of the genre. With evocative prose and interpretive gusto, Cao offers pairings of things that delightfully surprise the reader—butterflies and rail cars, nocturnes and banknotes—thereby challenging us to see unexpected phenomena in landscape representation, from foldings and closures to wastelands and decay."—Wendy Bellion, Associate Professor of Art History, University of Delaware

"As the first coherent genre in American painting, landscape has a special role in our art histories. Maggie Cao argues through incisive new readings of canonical and eccentric paintings that the demise of landscape propelled its original obsessions (stockpile or wilderness? Property or Eden?) into surprising places, where 'landscape’s breaking points' crash into modernity itself. Reinvented as the 'elemental big forms' animating twentieth-century modernisms and postmodernisms in the United States, nineteenth-century landscape, in Cao’s terrific telling, manifests American destiny like nothing else."—Caroline A. Jones, Professor of Art History, Massachusetts Institute of Technology

"Cao's book offers a compelling exploration of American landscape painting as a genre that has never really ended but has always had an end in sight of one kind or another. By examining a number of limited cases, Cao productively reminds us that the nature of landscape painting—like the 'nature' it seems to deliver—is thoroughly constructed and contested. Her book demonstrates the importance of looking critically at landscape and seeing through its maneuvers."—Alan C. Braddock, Ralph H. Wark Associate Professor of Art History and American Studies, William & Mary