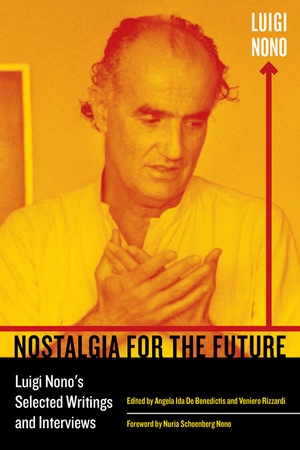 Nostalgia for the Future Luigi Nono's Selected Writings and Interviews

Nostalgia for the Future is the first collection in English of the writings and interviews of Luigi Nono (1924–1990). One of the most prominent figures in the development of new music after World War II, he is renowned for both his compositions and his utopian views. His many essays and lectures reveal an artist at the center of the analytical, theoretical, critical, and political debates of the time.

This selection of Nono’s most significant essays, articles, and interviews covers his entire career (1948–1989), faithfully mirroring the interests, orientations, continuities, and fractures of a complex and unique personality. His writings illuminate his intensive involvements with theatre, painting, literature, politics, science, and even mysticism. Nono’s words make vividly evident his restless quest for the transformative possibilities of a radical musical experience, one that is at the same time profoundly engaged with its performers and spaces, its audiences, and its human and social motivations and ramifications.

Resources for Your Summer Research: Primary Sources in Music

As part of our “Resources for Your Summer Research” blog series, we present some of our primary sources in Music to enrich your reading as you prepare for the coming academic year. …

Italian avant-garde composer Luigi Nono (1924–1990) was part of the group of high modernists whose work dominated the post-war European music scene. Experimenting with sound and technology, Nono's compositions and writings frequently addressed the role of the arts in a progressive society.

Angela Ida De Benedictis is Curator and Research Associate at the Paul Sacher Foundation (Basel). She is a member of the Scientific Committee of the Luigi Nono Archive and Scientific Director of the Centro Studi Luciano Berio. Veniero Rizzardi is Professor at the State Conservatory of Padua and Adjunct Professor at the Ca’ Foscari University in Venice. He is cofounder of the Luigi Nono Archive in Venice and also a curator of a new music series at the University of Padua. Both De Benedictis and Rizzardi have edited critical editions of music by Luigi Nono.

"The appeal of what the English music historian Harriet Boyd-Bennett called Nono's 'sonic hubub' is elucidated in this long overdue collection of the composer's writings and interviews. A comparable French edition of this material appeared back in 1993, which indicates how belated, albeit still timely, its insights are for opera lovers undeterred by avant garde sounds."—Opera Now

"Nostalgia for the Future makes available a representative selection of Nono’s writings as well as his major interviews in English for the first time. Finally English-speaking readers will have access to Nono’s courageous and humane vision of how music can impact the real world, a message that has new and urgent relevance today."—Anne C. Shreffler, Harvard University

"We are only just beginning to incorporate Luigi Nono into our understanding of ourselves as musicians. Too many musicians are not aware, or are only peripherally aware, of Nono’s music, let alone his influential ideas about music. Until now, the lack of an English translation of his writings has been perhaps the most significant obstacle. Nostalgia For the Future opens the door to Nono’s provocative and personal voice. It will change scholarship, not just about Nono but about music."—Eric Chasalow, composer, Professor of Composition at Brandeis University, and Director of BEAMS, the Brandeis Electro-Acoustic Music Studio


"What most impressed me each time Luigi Nono and I met was his inspiring humanism, his deep open-mindedness and broad vision about the world, and his staggering capacity to penetrate my imagination and, through our dialogue, let it discern other utopias. His writings beautifully convey these outstanding qualities of a unique composer in his generation. Extraordinarily stimulating, moving, and much needed nowadays."—Marco Stroppa, composer and Professor of Composition at the State University of Music and Performing Arts, Stuttgart

"Nostalgia for the Future brings the reader closer to Nono—thinker, composer, continuously reformulating explorer—than one would have thought possible. The dedicated editors have undertaken their task in a rigorous and assiduous manner, forging a document in five parts that clarifies much that was formerly obscured. We encounter a visionary artist, broadly informed, independently minded, continuously seeking the means to realize his evolving vision. One is intrigued, impressed by his resolve, his resistance to compromise even when the dream might verge on the untenable. Nono’s life exemplifies his statement that “Art lives and will continue to fulfill its task. And there is still much wonderful work to be done.”—Roger Reynolds, Pulitzer-Prize winning composer and Professor of Music at the University of California, San Diego

"Despite his fervent involvement in politics, I always found Luigi Nono one of the most poetic of the Darmstadt composers. These essays and interviews dissolve the apparent contradiction, surrounding his music with the astonishingly rich diversity of culture from which it grew: his knowledge of not only the early music repertoire but its aesthetics (remarkable for the time), his ability to find deep parallels between Webern and Haydn, his attempts to create a “theater of struggle,” his well-informed criticisms of American culture. His poetics and his politics were both attempts to reach the heart of lived experience."—Kyle Gann, author of Charles Ives’s Concord: Essays after a Sonata

"English editions of Luigi Nono’s writings and interviews have been long overdue. These translations excellently fill that need. They reveal the breadth of Nono’s immense intellectual curiosity and knowledge in such wide ranging fields as history, philosophy, the visual arts, and, of course, music and politics. Extending from his early life and studies with Malipiero, Maderna, Scherchen, and others in the 50s until the end of his life in 1990, this book provides a highly informative and inspiring experience about one of the leading composers of the late 20th century."—Richard Teitelbaum, composer, Bard College
Read More >

EXCURSUS I. An Autobiography of the Author Recounted by Enzo Restagno (1987)

PART TWO. MUSIC ONSTAGE: FROM A "THEATER OF IDEAS" TO THE "TRAGEDY OF LISTENING"
1. Some Clarifications on Intolleranza 1960 (1962)
2. Possibility and Necessity of a New Music Theater (1962)
3. Play and Truth in the New Music Theater (1962)
4. Die Ermittlung: A Musical and Theatrical Experience with Weiss and Piscator [Music and Theater] (1966)
5. Toward Prometeo: Journal Fragments (1984)

EXCURSUS IV. Technology to Discover a Universe of Sounds: Interview with Walter Prati and Roberto Masotti (1983) 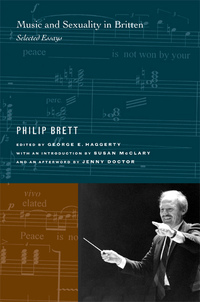