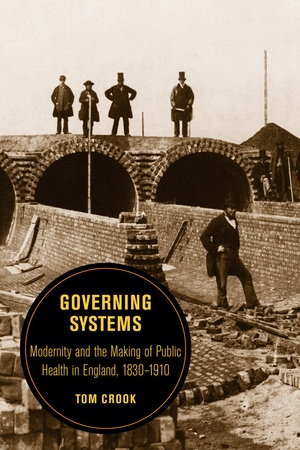 Governing Systems Modernity and the Making of Public Health in England, 1830–1910

When and how did public health become modern? In Governing Systems, Tom Crook offers a fresh answer to this question through an examination of Victorian and Edwardian England, long considered one of the critical birthplaces of modern public health. This birth, Crook argues, should be located not in the rise of professional expertise or a centralized bureacratic state, but in the contested formation and functioning of multiple systems, both human and material, administrative and technological. Theoretically ambitious but empirically grounded, Governing Systems will be of interest to historians of modern public health and modern Britain, as well as to anyone interested in the complex gestation of the governmental dimensions of modernity.

"The value of the book lies in its impressive command of detail."—Journal of Modern History

"Crook has done much... [his] fine book gives me hope that historians will come back to (or, more properly, discover for the first time) a kind of research immensely important to the understanding of the present and the recent past, and long neglected."

"This book should inspire a good debate in the urban history and the public health subfield over Crook’s argument for a revolutionary discourse of systems."—American Historical Review

"Crook presents a sophisticated new interpretation of the English route to modernity... this is a very stimulating book that takes a series of traditional urban history debates and casts them in a very different light, both renaming and re-thinking many of the old problems."—Social History of Medicine

"Tom Crook has produced something of a tour de force, finding an original take on a subject already much traversed by accomplished scholars such as Anne Hardy and Christopher Hamlin. The result is a pleasure to read: the writing lyrical and lucid, and the text moving easily between theoretical frames and rich empirical exposition."—Cultural and Social History

"A fascinating proposal of how to study technological systems in the nineteenth century."

"Governing Systems is an ambitious, original, and stimulating book on a central subject of modern British history, indeed of modern history: the forces creating 'modernity.' Crook gives equal attention to local detail, variation, and contingency and to general principles and dynamics of social and administrative change. In sum, this is an important book that will spark debate and leave its mark on the subject."—Frank Trentmann, author of Empire of Things: How We Became a World of Consumers, from the Fifteenth Century to the Twenty-First

"Governing Systems is an absolutely excellent book: sophisticated in conception, tightly argued, brilliantly researched, highly polished, and beautifully written. It is restlessly unreductive in its analysis of government, technology, and health, and it makes much of the work in this area seem simplistic by comparison. It achieves this level of subtlety by being simultaneously empirical, theoretical, and synthetic—a rare combination. It truly captures the sense of government as something multiple, dynamic, frustrating, and contingent, by focusing on the mundane, daily, nitty-gritty acts of trying to get people (and technologies) to behave in particular ways to achieve certain ends."—Chris Otter, author of The Victorian Eye: A Political History of Light and Vision in Britain, 1800–1910

1. In Search of Hygeia: Systems, Modernity, and Public Health
2. A Perfect Chaos: Centralization and the Struggle for National System
3. Numbers, Norms, and Opinions: Death and the Measurement of Progress
4. Officialism: The Art and Practice of Sanitary Inspection
5. Matter in Its Right Place: Technology and the Building of Waste Disposal Systems
6. Stamping Out: Logistics, Risk, and Infectious Diseases
7. Personal Hygiene: Cleanliness, Class, and the Habitual Self
8. Conclusion: Systems, Variations, Politics