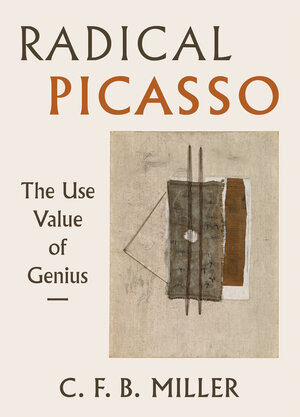 Radical Picasso The Use Value of Genius

While the personality cult of Pablo Picasso still holds sway over his popular reputation, the force of his work has fallen into disuse. In this groundbreaking and ambitious study, C. F. B. Miller uses that force to undo and remake our understanding of the twentieth century's most legendary artist. By critiquing this legend and showing how, even now, the art itself disrupts received ideas, Radical Picasso rethinks Picasso's function in the history of modernism.

Presenting a fresh account of cubism as an art of negativity and excess, Miller juxtaposes early cubist painting with G. W. F. Hegel, high cubism with Plato and his critics, and "synthetic" cubism with Walter Benjamin. The "guitar" assemblages of 1926 radicalize collage, taking up the racialized and gendered remainders of modernist aesthetics. Next to surrealism, Picasso's sexuality becomes a biopolitical problem, while the Crucifixion of 1930, and the Picasso myth at large, intersect with the writings of Georges Bataille. At the same time we see how, from his arrival in the art market to the games he played with his self-image in the 1950s, Picasso exploited the very fictions of genius that today determine his posthumous brand. Ultimately, in deconstructing the institution we call "Picasso," Radical Picasso retrieves his art from misrepresentation and argues for its continuing use value as a means of thought.

C. F. B. Miller is Lecturer in Art History and Theory at the University of Manchester.

"A book of enormous ambition, C. F. B. Miller's Radical Picasso questions the most fundamental assumptions about the achievement of Pablo Picasso. This is a book absolutely to be contended with by anyone approaching this body of artistic production."—Charles Palermo, author of Modernism and Authority: Picasso and His Milieu around 1900

"In Miller's Radical Picasso, 'Picasso' names not a person but a heterogenous body of work—one crucial to the history of modernist art yet also constituting an immanent critique of it. Through a form of close writing cannily matched to the complexities of the work, this book recalls us from the domesticated 'Picasso' to which we have become accustomed to the more radical, disruptive, and disorienting aspects lurking within."—Lisa Florman, Professor of History of Art, Ohio State University