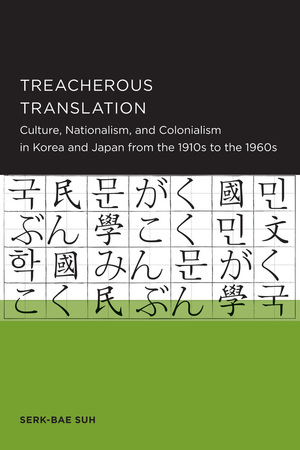 This book examines the role of translation—the rendering of texts and ideas from one language to another, as both act and trope—in shaping attitudes toward nationalism and colonialism in Korean and Japanese intellectual discourse between the time of Japan’s annexation of Korea in 1910 and the passing of the colonial generation in the mid-1960s. Drawing on Korean and Japanese texts ranging from critical essays to short stories produced in the colonial and postcolonial periods, it analyzes the ways in which Japanese colonial and Korean nationalist discourse pivoted on such concepts as language, literature, and culture.

Serk-Bae Suh teaches Korean literature and culture at the University of California, Irvine.

"Marvelously rich, thought-provoking ... The argument is exemplary in its clarity and sophistication and in its ability to smoothly meld complex political philosophy and close textual analysis—a tour de force."—Monumenta Nipponica

Songs to Make the Dust Dance