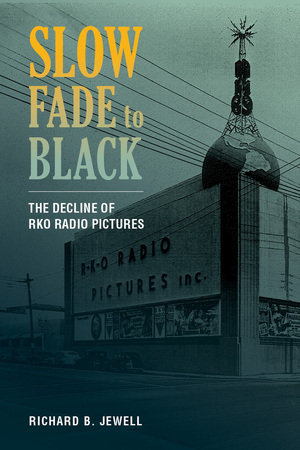 Slow Fade to Black The Decline of RKO Radio Pictures

Slow Fade to Black completes Richard B. Jewell’s richly detailed two-part history of the RKO film studio, which began with RKO Radio Pictures: A Titan Is Born, published in 2012. This second volume charts the studio’s fortunes, which peaked during World War II, declined in the postwar period, and finally collapsed in the 1950s. Drawing on hard-to-access archival materials, Jewell chronicles the period from 1942 to the company’s demise in 1957. Towering figures associated with the studio included Howard Hughes, Orson Welles, Charles Koerner, Val Lewton, Jane Russell, and Robert Mitchum. In addition to featuring an extraordinary cast of characters, the RKO story describes key aspects of entertainment history: Hollywood’s collaboration with Washington, film noir, censorship, HUAC, the rise of independent film production, and the impact of television on film. Taken as a whole, Jewell’s two-volume study represents the most substantial and insightful exploration of the Hollywood studio system to date.

Richard B. Jewell is Hugh M. Hefner Professor of Cinema and Media Studies at the USC School of Cinematic Arts. He is author of The Golden Age of Hollywood and The RKO Story, among other works, as well as coauthor of Primary Cinema Resources. In 2008, he was named Academy Film Scholar by the Academy of Motion Picture Arts and Sciences.

"Jewell’s scholarship is impeccable and his text is plain-spoken and highly readable. Every studio deserves a similar examination; thank goodness the right man tackled this particular task."—Leonard Maltin

"...a fascinating study that readers will find difficult to pause between finishing one chapter and starting the next one."—Los Angeles City Historical Society Newsletter

“With this engrossing second volume to his masterful business history, Richard Jewell brings the story of RKO to its tragic close. It’s a smartly researched tale of malfeasance and mischief and sheer managerial madness, told with Jewell’s talents for the illuminating detail as well as the revealing big picture. An essential contribution to Hollywood history.”—Dana Polan, Professor, Department of Cinema Studies, New York University

“With Slow Fade to Black, Richard Jewell completes his monumental history of RKO Pictures, which stands with Tino Balio’s two-volume history of United Artists as the best ‘inside account’ of a Hollywood studio ever written. Making use of archival material no longer available to film scholars (or anyone else), Jewell reconstructs the operations of the studio in amazing detail. He also takes us inside the offices—and the business minds—of executives like Peter Rathvon and Charles Koerner, who guided the studio to its glory years in the 1940s, and the inimitable Howard Hughes, who drove it tragically into the ground in the 1950s.”—Thomas Schatz, Professor, Department of Radio-Television-Film, The University of Texas at Austin