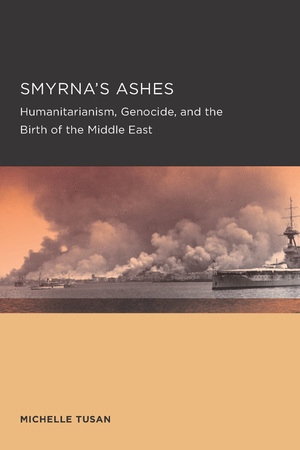 Smyrna's Ashes Humanitarianism, Genocide, and the Birth of the Middle East

Today the West tends to understand the Middle East primarily in terms of geopolitics: Islam, oil, and nuclear weapons. But in the nineteenth century it was imagined differently. The interplay of geography and politics found definition in a broader set of concerns that understood the region in terms of the moral, humanitarian, and religious commitments of the British empire. Smyrna’s Ashes reevaluates how this story of the “Eastern Question” shaped the cultural politics of geography, war, and genocide in the mapping of a larger Middle East after World War I.

Michelle Tusan is Professor of History at the University of Nevada, Las Vegas.

“Set against one of the most horrible atrocities of the early twentieth century, the ethnic cleansing of Western Anatolia and the burning of the city of Izmir, Smyrna’s Ashes is an important contribution to our understanding of how humanitarian thinking shaped British foreign and military policy in the Late Ottoman Eastern Mediterranean. Based on rigorous archival research and scholarship, well written, and compelling, it is a welcome addition to the growing literature on humanitarianism and the history of human rights.”—Keith David Watenpaugh, University of California, Davis

“Traces an important but neglected strand in the history of British humanitarianism, showing how its efforts to aid Ottoman Christians were inextricably enmeshed in imperial and cultural agendas and helped to contribute to the creation of the modern Middle East.”—Dane Kennedy, The George Washington University

“Tusan shows vividly and compassionately how Britain’s attempt to build a ‘Near East’ in its own image upon the ruins of the Ottoman Empire served as prelude to today’s Middle East of nation-states.”—Peter Mandler, University of Cambridge

“An original and meticulously researched contribution to our understandings of British imperial, gender, and cultural history. Smyrna’s Ashes demonstrates the long-standing influence of Middle Eastern issues on British self-identification. Tusan’s conclusions will engage scholars in a variety of fields for years to come.”—Nancy L. Stockdale, University of North Texas