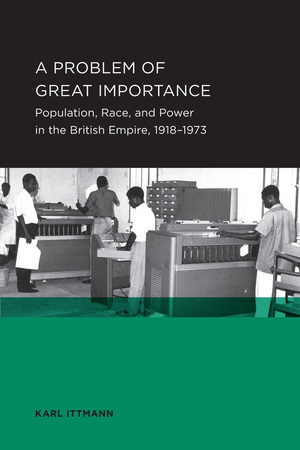 Problem of Great Importance Population, Race, and Power in the British Empire, 1918–1973

A Problem of Great Importance traces British imperial efforts to engage metropolitan activists who could improve its knowledge of colonial demography and design programs to influence colonial population trends. While imperial population control failed to achieve its goals, British institutions and experts would be central to the development of postcolonial population programs.

Researchers, scholars, and historians of British history will gain greater perspective into the effects of demography on imperial governance and colonial and postcolonial British views of their place in the world.

Karl Ittmann is Associate Professor of History at the University of Houston.

"Ittmann’s study will be essential reading for anyone interested in the nature of imperial governance, the population control movement, or the lasting legacies of imperialism and decolonization into the twenty-first century."—American Historical Review

"Viewing the empire through the lens of population allows Ittmann to see continuity across the great divide of decolonization, and provides insight into the colonial roots of many of our current ways of understanding global population and global issues."—Journal of Modern History