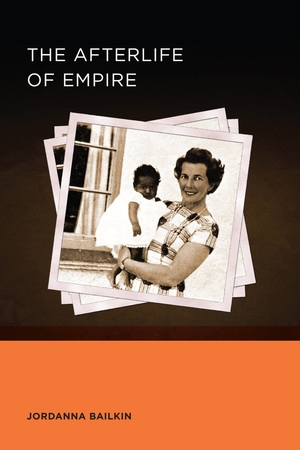 The Afterlife of Empire is an award-winning investigation on how decolonization transformed British society in the 1950s and 1960s. Although usually charted through its diplomatic details, the collapse of the British empire was also a deeply personal process that altered everyday life, restructuring routines, individual relationships, and social interactions.

The book traces a set of diverse yet interrelated and richly compelling stories: West Indian migrants repatriated for mental illness, young Britons volunteering in the former colonies, overseas students seeking higher education, polygamous husbands and wives facing invalidation of their marriages, West African children raised by white, working-class British families, and Irish deportees suspected of terrorism. Postwar welfare–from mental health to child care–was never simply a British story, but was shaped by global forces, from the experiences and expectations of individual migrants to the emergence of new legal regimes in Africa and Asia. The book thus recasts the genealogy and geography of welfare by charting its unseen dependence on the end of empire.

Using a wealth of recently declassified files from the National Archives, oral histories, court cases, press reports, social science writings, and photographs, Jordanna Bailkin illuminates the relationship between the postwar and the postimperial. The Afterlife of Empire is the winner of several notable prizes including The Morris D. Forkosch Prize from the American Historical Association, the Stansky Book Prize from the North American Conference on British Studies, and the 2013 Biennial Book Prize from the Pacific Conference on British Studies.

“Quietly dazzling. . . . In this gripping account of welfare’s postcolonial history, Jordanna Bailkin throws the archives wide open and invites us to walk through them with new eyes—and with renewed appreciation for the intimate connections between empire and metropole in the making of contemporary Britain. The Afterlife of Empire challenges us to reimagine how we think and teach the twentieth century in Britain and beyond.”—Antoinette Burton, University of Illinois, Urbana-Champaign

“The Afterlife of Empire is a brilliant contribution to the history of twentieth-century Britain. It does what no other book has done: narrating the end of empire and the rise of the postwar welfare state together, while placing the stories of ordinary people—children, adolescents, parents, husbands, and wives—at the heart of this account. With this book, Jordanna Bailkin transforms our understanding of how some of the most critical issues of twentieth-century British history were not just perceived, but lived.”—Stephen J. Brooke, York University